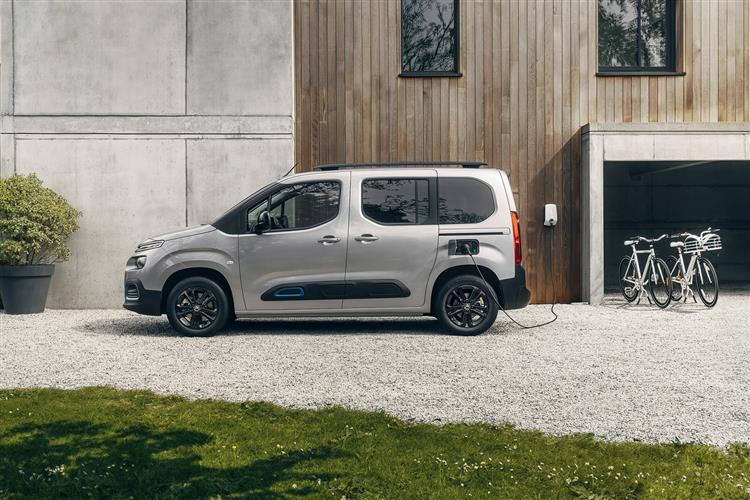 Try and picture a van-based compact people carrier. Bet you weren't imagining anything quite as nice as this. The MK3 model version of Citroen's much more civilised third generation Berlingo people carrier has been further distanced from its predecessors' basic commercial roots. With smarter styling, more equipment and efficient PureTech petrol and BlueHDi diesel engines, plus a full-electric version, this value-for-money five or seven-seater is now a vehicle that demands to be taken very seriously indeed. If you're after a budget family carry-all, it's well worth a look.

You'll probably be very pleasantly surprised by how the Berlingo drives. The old bump, thump and reverberations that characterised previous versions have well and truly gone. I know it's a bit of a cliche when discussing this sort of MPV but there is a lot of truth in describing this boxy Citroen as 'car-like'. For what is quite a tall, high vehicle, there's none of the tippy feeling that characterised the previous generation version of this design, helped in no small part by beefier anti roll bars. And a much improved suspension set-up. Which in turn has made possible the kind of ride quality you'd like to expect from a Citroen: in other words absorbent and very well tuned for our terrible roads. It's an important thing to consider, for I reckon that aside from safety and practicality, ride quality needs to be one of your key criteria when making a decision on an MPV-style vehicle. Too firm and you'll never manage to get the kids off to sleep on a long journey at night: too soft and they'll get car sick. The Berlingo strikes a good balance because it's a little softer than you might expect in compression and rebound - in other words, over the bumps - but a little firmer than you'd think in roll - in other words, around the corners. Engine-wise, you get to choose between a 1.2-litre three cylinder Puretech petrol unit with 110hp. there's also an auto transmission 130hp version of this unit. The combustion alternative is a 1.5-litre BlueHDi diesel (with 100 or 130hp). Or you can go full-electric with the e-Berlingo, which uses a 50kWh 100kW EV powerplant with a 170 mile range.

Let's face it, cash-strapped families don't want to spend too much on the car that'll move them about. The good news with this Berlingo is that they don't have to. Prices range in the £22,000-£28,000 bracket for combustion model - the all-electric e-Berlingo starts at around £30,000 after subtraction of the available government Plug-in car Grant. Either way, there's the option of a seven-seater variant if you want it. If you do, you'll want the lengthier 'XL' body style, which demands a £1,700 premium over the five-seat 'Size M' body shape. In the combustion range, there are three trim levels - 'Feel', 'Flair', 'Rip Curl' and top 'Flair XTR'. For e-Berlingo customers, there are 'Feel' and 'Flair XTR' options. The flagship 'Flair' variants are very generously equipped, including features like an 8.0in central infotainment screen, dual-zone climate control, a head-up instrument display, a 360-degree manoeuvring camera, a top-spec interactive navigation system, sophisticated connectivity on four different levels and a so-called Modutop system consisting of panoramic glass roof panels as well as all manner of shelves, gadget compartments and an ambient lighting show above occupants' heads. Citroen is also including its latest camera-driven safety tech too.

Day-to-day running costs are kept well in check. The 110hp 1.2-litre PureTech petrol variant most will want manages 45.8mpg on the combined cycle and 146g/km of CO2. The BlueHDi 100 diesel improves those stats to 57.4mpg and up to 134g/km. Of course, you'll have to do your bit as a driver in order to get anywhere near the published fuel figures. To help you, the centre dash infotainment screen's 'Trip Computer' section gives you read-outs for current fuel consumption and remaining range. Plus it will tell you how long the Stop & Start system has been functional for on any given trip - though I'm not really sure why you'd ever want to know that.... The e-Berlingo has a range of up to 170 miles and supports up to 100kW rapid (DC) charging, with an 80% re-charge taking less than 30 minutes. A full charge from a 7.4 kW single-phase wallbox takes 7.5 hours thanks to the 7.4kW on-board charger. Enough on powertrain efficiency. What about other financial considerations? Well, regular service intervals come round every 16,000 miles or 12 months, depending on which comes sooner. If you engage in what Citroen calls 'Arduous' conditions of use, then you'll need a servicing visit every 10,000 miles or every year. The bottom line is that most owners will need to budget around an annual dealership appointment; there are plenty of Citroen outlets to choose from, so you should never be too far from one. So you can budget ahead, the French maker offers its 'Citroen Maintenance' scheme that lets you pay either a one-off fee or monthly instalments to cover the cost of the routine upkeep of your car for as long as three years and 35,000 miles.