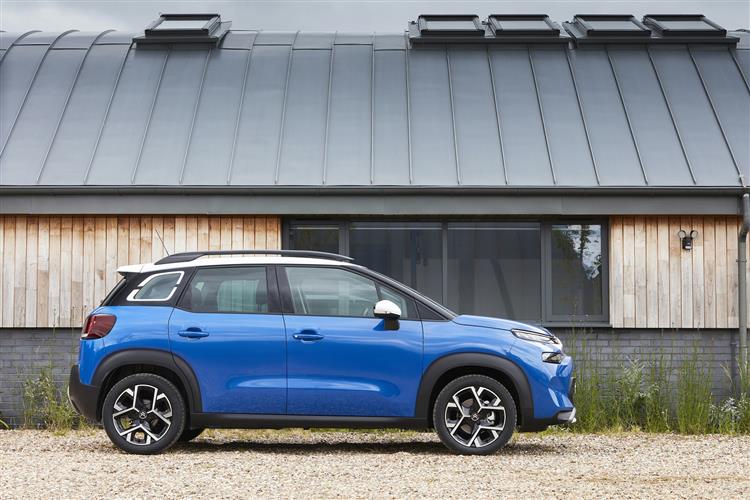 The engine line-up hasn't changed much, so as before, it's broadly shared with its C3 supermini stablemate, though this SUV-orientated model steers clear of the feeblest C3 units. The range starts with a three cylinder turbo petrol 1.2-litre PureTech 110 unit only offered with 6-speed manual transmission. If you want a petrol auto, you'll need the same engine in PureTech 130 guise, which is only offered mated to Citroen's EAT6 auto 'box. This is the latest Euro 6.3-compliant powertrain, which meets the very highest European emission standards. If you want a diesel, there's the usual 1.5-litre BlueHDi 110 unit, mated to 6-speed manual transmission. Ride quality is a little softer than the segment norm - which typical Citroen owners tend to like. This would-be SUV introduced new technologies to the C3 range, including Grip Control with Hill Descent Assist to help in the very unlikely event of an owner being brave enough to take this little Crossover off road. The enhanced traction system claims to provide control and safety even on steep inclines, reducing the risk of slipping or acceleration as the vehicle descends in forward or reverse gear.

Prices start at around £20,000 and there's a choice of four trim levels, 'C-Series Edition', 'Shine', 'Shine Plus' and 'Rip Curl'. Many buyers will be opting for the two 'Shine' spec levels, in which case a budget in the £21,000 to £24,000 bracket will be needed. With this revised model, the number of potential personalisation options has been increased. There are now 70 exterior combinations in total, including seven different body colours and an exterior bi-tone roof available in three colours which can be complimented by one of the four exterior colour pack options. Inside, customers can select between five different interior ambiences comprising of special seat upholstery, a range of dashboard textures and door panel designs, and touches of colour on the central console surround, steering wheel, air vents and seat backs. Connectivity and infotainment is taken care of via a 7-inch touchscreen which groups together the key vehicle functions such as air conditioning, radio, telephone and Sat Nav. Safety-wise, there are up to 12 driving aids, including a colour Head-up Display, Speed Sign Recognition, an Active Safety Brake system, Intelligent Beam Headlights, Park Assist, a reversing camera, Lane Departure Warning and a Blind Spot Monitoring set-up.