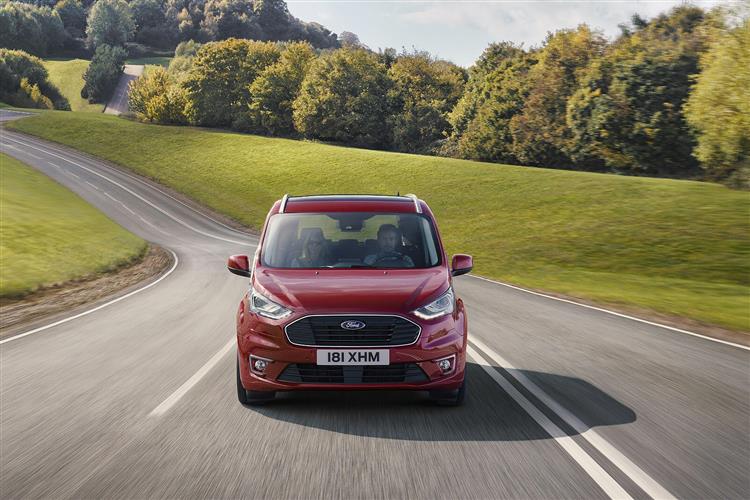 The improved seven-seat Ford Grand Tourneo Connect is a rugged but cleverly-engineered people mover that's sourced from commercial vehicle roots but offers enough sophistication to suit the needs of many growing families. Its especially frugal when equipped with the brand's latest efficient 1.5-litre EcoBlue diesel engines. When used as a five-seater, you get a huge amount of useful luggage space.

The Ford Grand Tourneo Connect is a no-nonsense model based on commercial vehicle roots that offers space for seven and strong value for money. The target customers for this people carrier would be no more likely to comparison shop it against a slick seven-seat Ford Grand C-MAX or S-MAX MPV than they would a Smart Fortwo. Ford has been quick to realise that in offering similarly sized but very different MPVs to different customers, it broadens its market reach quite significantly. Other manufacturers have twigged this as well; Citroen sells Berlingo Multispaces and C4 Picassos for example. Ford really has committed to this sector though and one look at the Grand Tourneo Connect shows why a specialist approach can pay dividends. Here's the usefully revised version.

Ford won't sell you the Grand Tourneo Connect with the 1.0-litre Ecoboost engine as it would probably struggle with the bigger body. This means you get a 1.5-litre EcoBlue diesel engine with a choice of 100 and 125PS power outputs. The former gets a five-speed manual box, the latter a six-speed. There's an 8-speed Powershift automatic option for those who want it. On the move, like any LCV-based product, this one handles better fully loaded, but even when there's no one in the vehicle but you, cornering is predictable. Bodyroll's well controlled too, so roundabouts can be taken at speed without the Connect rolling about alarmingly. The Tourneo Grand Connect isn't the swiftest car in its class, registering a sprint to 62mph time of 13.3s with the 100PS EcoBlue engine, while the 125PS powerplant shaves about a second off this figure. Either way, the top speed is up around the 100mph mark. You get electrically-assisted power steering and a fairly conventional strut front suspension and torsion beam rear.

Judging how much and how little styling to throw at a no-nonsense model like this is a tough call. Certainly, the Grand Tourneo Connect needs to retain not only a modest price but also the inherent space and durability that's built into every Ford commercial vehicle. However, it also needs the sort of features that will make it appeal to private buyers - which means giving it a bit more than a place to put a cup-a-soup and a rolled up copy of The Sun. The sleeker front-end of this revised model features a five-bar Tourneo grille, combined with slimmer headlamps and a more aerodynamic lower bumper and front spoiler. The flanks don't have a whole lot of shape in them, but that's excusable if sliding rear doors are fitted. Every rear seat has integral head restraints and, of course, three-point seatbelts. Split 60/40, the seat backs also fold and tumble and can be removed, allowing you to maximise the cargo space. The rear seats can be folded flat into the footwell for maximum luggage space and there's an optional third row of seats split 50/50 which can also be folded flat. Outer second row rear seats have ISOFIX anchorage points, making it easy to fit the latest removable child seats. You get storage boxes on both the driver and passenger sides of the dashboard, 1.5-litre holders in the front doors, floor stowage and even 'aircraft style' overhead lockers. There's up to 2,620-litres of space; the third row seats also slide fore/aft to allow customers the choice between extra legroom or increased luggage capacity. You get up to 1,264-litres of space in a seven seat model with the two rear seats folded.

Ford offers the Grand Tourneo Connect in two trim levels - Zetec and Titanium. The 100PS engine is available in Zetec trim, while the 125PS powerplant is available in Zetec and Titanium guises. Prices open at around £21,000. The top specification Grand Tourneo Connect Titanium costs around £23,500 so clearly, the real value is to be found further down the range. But what to compare this MPV with? Most commercial-based MPVs are smaller. The Grand Tourneo Connect measures fully 4,818mm long, making it a good deal more spacious than something like a seven-seat Vauxhall Zafira Tourer. In fact it's not far off the dimensions of a full-sized MPV like a SEAT Alhambra, prices for which start some way north of £25,000. Equipment levels are reasonably generous, with even base Zetec trim offering air conditioning, a heated windscreen and mirrors, an eight-way adjustable driver's seat and Ford's clever SYNC3 system with emergency assist. Those looking for some really car-like refinements will be drawn to range-topping Titanium trim, which is supplied with cruise control, static cornering lights, parking sensors, alloy wheels, a panoramic roof, dual zone air con, seat back tray tables and integral roof rails. Traffic Sign Recognition and a Lane Keeping Aid are both optional features. Further advanced technologies include a comprehensive new range of segment-first driver assistance features including Intelligent Speed Assist that enables automatic adjustment of maximum vehicle speed to remain within legal limits, the Pre-Collision Assist with Pedestrian Detection emergency braking system, Side Wind Stabilisation and Active Park Assist that helps to steer the vehicle into both parallel and perpendicular parking spaces.

As you might expect from a vehicle powered by the latest generation of Ford diesel engines, the Grand Tourneo Connect isn't going to cost a fortune to run. The 100PS powerplant can manage nearly 65mpg on the combined cycle and emits under 115g/km. Specify your car with Ford's Powershift automatic transmission and it won't put too much of a dent in these figures. Eiother way, you get an Auto Start-Stop system that cuts the engine when you don't need it, stuck in traffic or waiting at the lights.