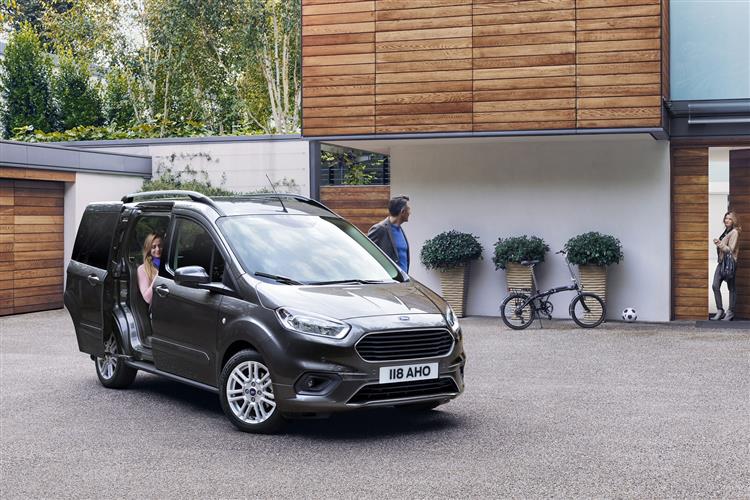 Sometimes, something simpler is more sensible. Take the turn of the century trend to create small People Carriers with bespoke car-like design. All you actually need as a starting point for such a vehicle is a small van. And if you agree and happen to be looking for a very compact MPV, you might be interested in this one, the Ford Tourneo Courier.

Back in 2014, Ford launched its smallest-ever van, the Transit Courier. It was a design able to provide a perfect base for the creation of a supermini-sized People Carrier, but that option wasn't initially taken up because the Blue Oval brand already had one of those in its range, the Fiesta-based B-MAX. That car, launched in 2012 and notable for a clever design that completely dispensed with a central B-pillar, was ultimately a casualty of the market's fashion-led switch away from MPVs to SUVs and was quietly deleted in 2018. Rather than replace it with something else styled from scratch, thoughts at Ford's design department turned back to the Transit Courier and its suitability as a base for a little People Carrier. Which is why we've got this car, the Tourneo Courier, launched in mid-2018 as part of a rejuvenated range of van-based Ford Tourneo People Movers. Despite the LCV underpinnings, there's no lack of sophistication here. Especially under the bonnet where family buyers choose between Ford's latest 1.5-litre EcoBlue diesel or a 1.0-litre EcoBoost petrol engine enhanced with cylinder deactivation.

It's always quite refreshing to drive a car whose only purpose in life is to get from A to B as affordably as possible. So there are no pretensions here - no dynamic expectations that might be disappointed. The underpinnings are derived from the old sixth generation Fiesta but the engines are borrowed from the current one, which means that Tourneo Courier buyers choose either a 1.5-litre EcoBlue diesel unit or the 1.0-litre three cylinder EcoBoost powerplant I tried. Both engines put out 100PS and must be mated to a freshly-designed 6-speed manual gearbox. The EcoBoost variant I tested will be the choice of most, who'll approve of the fact that this unit's efficiency has been enhanced by the additional of cylinder deactivation. Ride quality over broken surfaces isn't as smooth as I'd like, but things settle down at highway speeds. At that point, the petrol engine's buzzy thrum subsides a little too, though you do still get quite a lot of wind and road noise from the boxy shape and the high profile tyres. As you'd expect from a car with such an expansive glass area, this MPV is simplicity itself to manoeuvre. The boxy shape makes it easy to see where the corners of the car are, the wide door mirrors are a commercial carry-over you'll be glad of and the expansive windscreen gives you a far wider field of vision than you'd get in a supermini. In fact, a Tourneo Courier delivers far more of a lot of things than you'd get in a supermini, but that won't prevent it from being a relatively rare sight on our roads.

This Tourneo Courier delivers honest van-derived design with refreshingly frank simplicity. The main visual change in recent times has been this revised front grille. Otherwise, the main thing of note here is just how much cabin space Ford has been able to fit into a car with a supermini-sized roadway footprint. And behind the wheel? Well this may be Ford's smallest MPV but you wouldn't think that from a seat inside. The perception of airiness is helped by the vast amount of headroom - and by superb all-round vision with an expansive windscreen that stretches high above your field of vision. Everything falls to hand easily and the centre stack now looks much more up to date than it did when the Courier was first launched, with the option of the brand's latest 'SYNC 3' infotainment technology. In the rear, accessed via sliding doors, you'd be tempted to say that there's just as much room as you'd get in the far pricier Tourneo Connect model. That airy roof height certainly makes it feel like that. In the boot, there's 708-litres of capacity. And if you need more, the 60-40-split rear bench pushes forward in two stages, up as much as 1,656-litres of space.

The buying proposition here is pretty straightforward: one body shape, a single 'Zetec' level of trim and a single transmission choice, a 6-speed manual gearbox. It comes mated to a choice of engines though; either the 100PS 1.0-litre EcoBoost petrol unit I tried, which from launch was priced from just under £15,000. Or a 100PS 1.5-litre EcoBlue diesel, which at the time of this model's introduction was priced from just over £16,000. Let's give you some Ford range perspective on that. The next model up in the brand's Tourneo People Mover range is the mid-sized Tourneo Connect, which comes only with diesel power. With the same 1.5-litre 100PS EcoBlue unit, an equivalent five-seat version of the 'Connect' would cost you nearly £6,000 more than this Courier model - which quite frankly, we think many family buyers would struggle to justify. The same comments apply if you shift your point of comparison to Ford's C-MAX MPV. OK, so the C-MAX is theoretically a slightly larger class of People Carrier, but the reality is that it gives you hardly any more luggage or people-carrying space than a Tourneo Courier. And costs around £7,500 more...

One of the things that's completely changed with this design since its original launch as a van is its running cost efficiency. That's down to the installation of a pair of fresh powertrains that both now conform to the latest Euro 6.2 emissions standard. And the provision of a 6-speed manual gearbox in place of the previous 5-speeder. A little annoyingly, you have to pay a touch more to maximise the benefits of all of this engineering effort because the brand has elected to make its engine Auto Start-Stop system an extra cost feature (it's £180 more) - which seems a bit mean. Try and negotiate it in with the price you agree with your dealer. Anyway, let's get to the figures, which for fuel economy have been measured according to the latest stricter 'WLTP' ('World harmonised Light vehicle Test Procedure') ratings cycle. The emissions stats we're going to quote here have been converted back to the older 'New European Driving Cycle' 'NEDC2' spec, since that's what a lot of rival models are still using. The 1.0 EcoBoost petrol unit I tried (the one that most Tourneo Courier buyers will choose) manages up to 43.5mpg on the combined cycle and 122g/km of CO2. Or 41.5mpg and 131g/km of CO2 if you do without Start-Stop. What about the diesel? Well, for the 1.5 EcoBlue unit, you're looking at up to 52.3mpg on the combined cycle and 112g/km of CO2. Or up to 51.4mpg and 117g/km if you do without Start-Stop.