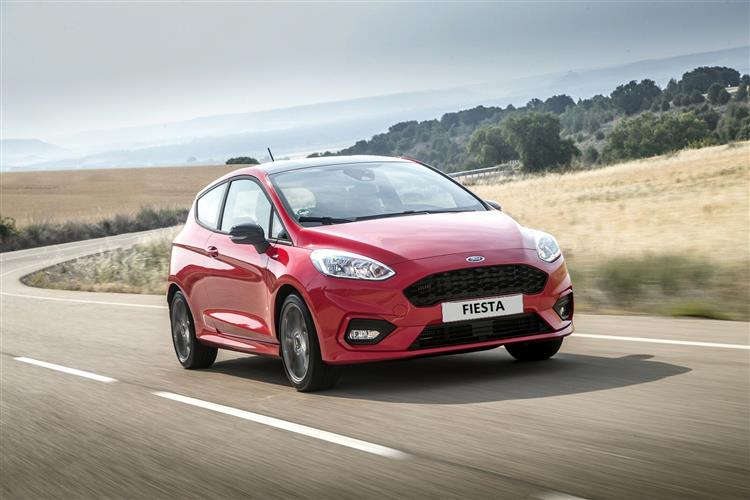 Not quite ready to go all-out electric but need greater efficiency in your next supermini? Then Ford has a proposition for you in the shape of this Fiesta EcoBoost Hybrid model. The brand's mild hybrid tech gives you some of the benefits of electrification without the priciest parts of this technology.

Electrification is everywhere in the market at present but there's not much evidence of that in the supermini segment. Not at prices the average person can afford anyway. If your budget can shoulder premium pricing, Toyota will sell you a full-Hybrid Yaris, Renault will now do the same with their Clio and Peugeot and Vauxhall have full-electric versions of their 208 and Corsa models. But not everyone can stretch to cars like these. Ford says it can offer a more sensible solution and this is it, the Fiesta EcoBoost Hybrid. This model adds mild hybrid tech to the company's usual 1.0-litre EcoBoost three cylinder petrol engine to create a small but significant improvement in efficiency. And, at the same time, a perkier feel through the gears. All at very little increase in price over conventional levels. Sounds promising.

Simplicity's the keynote here, so the 1.0-litre three cylinder EcoBoost petrol powerplant this car features is essentially the same one Ford's been offering since 2011, more recently enhanced with cylinder deactivation tech which cuts down on cylinder use at low-to-medium throttle speeds. In mHEV mild hybrid form though, this unit gets a lower compression ratio and a larger turbo. And it's been embellished by a beefed-up starter/generator driven by a belt at the front of the engine that stores the energy harvested when you brake or decelerate in a tiny 48-volt lithium-ion battery secreted at the back of the car. Which provides a bit of extra zip when you accelerate (Ford says up to 50Nm of extra torque) and delivers a little electric boost from low revs to 'torque-fill' while you're waiting for the turbo to spool up. So that little momentary hesitation you sometimes get with small little turbo engines when pulling off from roundabouts and away from junctions is dealt with too. Few potential Fiesta customers will have the ordinary version of this engine to benchmark against on their test drive but those already familiar with it would perhaps notice that in this form, this unit pulls more easily from almost any speed with fewer gear changes needed, which makes it feel like a much larger-capacity powerplant. We've already noticed when trying this unit in the Puma crossover that there's a pleasingly fizzy, thrummy soundtrack under full throttle: you certainly wouldn't think the little EcoBoost lump beneath the bonnet ahead of you had just three cylinders and a litreage capacity not much different to that of a good bottle of Burgundy. Most Fiesta EcoBoost Hybrid buyers will probably choose the 125PS version of this engine which gets to 62mph in 9.4s en route to 126mph. There's also a perkier 155PS version of this same unit which improves those figures to 8.9s and 136mph.

Apart from the badgework, there are no real visual changes to distinguish this mild hybrid Fiesta variant apart from its conventional range stablemates. As usual, it's offered in both three and five-door body styles and both are tidy pieces of styling with evolutionary styling and a bold, wide front grille. And inside? Well if you haven't yet tried this MK7 model, you'll be impressed by the reduction in centre console button clutter, many of the connectivity and entertainment controls relocated to the centre-dash 'SYNC3' 8-inch touchscreen. A semi-translucent piano black insert stretches all the way from the instrument binnacle to the centre console, giving the cabin a touch of class. As for the rear seat, well if you come to this car fresh from ownership of the previous generation model, then it's likely that you'll view Ford's greater efforts in this part of the cabin in a positive light. There is, after all, 16mm more knee room than there was before, plus the seats are softer and offer greater side-to-side support. Should you be trying a Fiesta having sampled a more spacious supermini rival though - and there are plenty - you'll probably be a little less inclined to be quite so generous. At least the boot's bigger this time round though, 17-litres larger at 292-litres for both body shapes. And, unlike most full-Hybrids and PHEVs, it's not reduced in size by the electrified tech. If you're able to flatten the 60:40 split-folding rear backrest, you'll free up one of the better total capacity figures in the class - 1,093-litres.

Think in terms of a price point of just under £20,000 for the Fiesta EcoBoost Hybrid in 125PS form; that's with plush mid-range 'Titanium'-spec trim. 'Titanium X', ST-Line Edition', 'ST-Line X Edition' and 'Vignale' versions are also available if you've more to spend and no doubt in future, Ford will offer this MHEV tech lower down the range on more affordable variants. There's a £320 premium if you want to upgrade from the 125PS unit to the 155PS version of this powerplant. You can't have auto transmission with either unit. As usual with the Fiesta, there's a choice of three or five-door hatch body styles; most choose the five-door variant of course and if you do that, then you'll also be offered the option of a crossover-style 'Active' model with a slightly raised ride height, SUV styling cues and 'slippery' road drive modes. 'Titanium'-spec includes an 8-inch centre-dash SYNC 3 touchscreen with navigation. Plus a Quickclear heated windscreen, Electronic Air Temperature Control and power-folding mirrors, rear parking sensors, cruise control, LED tail lamps and a Thatcham alarm. Whatever your trim choice, you'll be offered some up-scale equipment options, examples including a premium 'B&O PLAY' sound system and an openable panoramic glass roof. There's sophisticated safety too, including a Pedestrian Detection system that can even prevent collisions at night. And 'Active Park Assist' with brake interventions to prevent low-speed collisions when parking hands-free.

We've explained how the mHEV system works in our 'Driving Experience' section but we'll further add here that the belt-driven integrated starter/generator is also able to aid the powerplant's stop/start system in urban traffic, restarting the engine in approximately 300 milliseconds - about the same as the blink of an eye. And the 'BISG' also enables the Fiesta EcoBoost Hybrid's Auto Start-Stop technology to operate in a wider range of scenarios for even greater fuel savings, including when coasting to a stop below 10mph - and even when the vehicle is in gear with the clutch pedal depressed. Thanks to all of this, the subsequent reduction in the amount of work required from the petrol engine results, says Ford, in a fuel efficiency improvement of up to 9%. So what does that equate to in terms of stats? Well, let's base this around the Fiesta EcoBoost Hybrid variant most will choose, the 125PS mHEV 1.0-litre EcoBoost Hybrid manual gearbox variant. This returns up to 58.9mpg on the WLTP combined cycle and up to 109g/km of WLTP-rated CO2. For the 155PS version of this unit, the respective figures are up to 55.4mpg and up to 116g/km. You'll need some class perspective here; most directly comparable conventionally-engined supermini-segment models deliver about 5mpg less and put out about 15-20g/km of CO2 more.