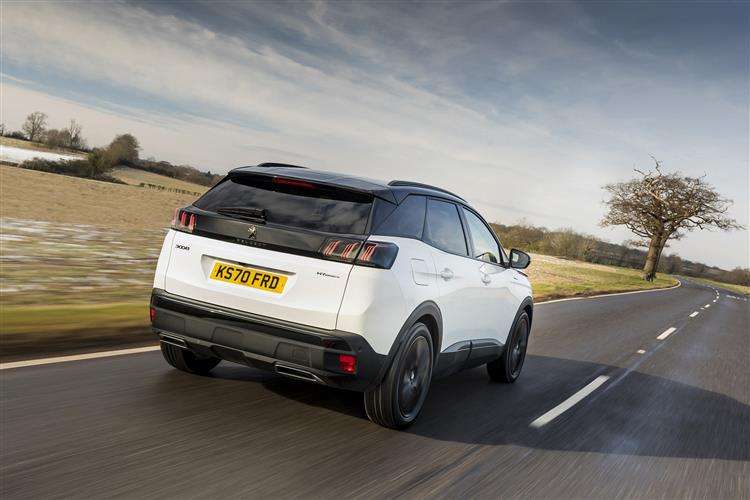 Peugeot wants to be a key player in the plug-in hybrid part of the mid-sized SUV segment with this car, the 3008 Hybrid. It looks smart, certainly makes the efficiency numbers and will work well as a package for a family buyer wanting a degree of EV tech but not quite ready to take the plunge into full-battery motoring. But though the plug-in technology on offer here is pretty cutting-edge, but it's also pretty heavy and pricey.

Plug-in Hybrid technology may turn out to be one of the more short-lived of the motor industry's propulsion options. The first plug-in hybrids didn't arrive until around 2015 and there's talk of future legislation banning them by 2035 (though in a post-Covid world, who knows how far that deadline might be extended?). What we do know is that right here and now, plug-ins (or PHEVs) are often the undecided green motorist's preference, even though they're long longer government-incentivised. The fully electrified commuting mileage, the absence of range anxiety and low taxation of PHEVs are all tempting. But the elephant in the room remains the high cost of this technology, which reflects in the price of all current contenders, including the one we look at here, the Peugeot 3008 Hybrid. Can it stack up? Let's find out.

This isn't the first time we've seen a Hybrid 3008 model. The first generation design was available in electrified form too, but that was a self-charging set-up mated to a diesel engine. This time round, a 1.6-litre petrol turbo powerplant mated to an 8-speed auto gearbox has been blended with more advanced plug-in hybrid technology that allows for 36 miles of WLTP-rated all-electric driving range. This powertrain features in two flavours: in 225hp form in the front-driven 3008 Hybrid. Or in 300hp guise in the AWD 3008 Hybrid4, the latter variant featuring two electric motors (a 108bhp unit on the front axle and a 111bhp motor on the rear axle - hence the nominal AWD capability). In both cases, the way that petrol progress is seamlessly integrated with electrified power is very impressive - and the whole package feels as quick as those output figures might suggest (rest to 62mph in the Hybrid4 takes just 5.9s en route to a 146mph maximum - or an 84mph all-electric maximum). So it ought to feel pretty quick. Well it does to a point. But things are rather blunted, as is usual with this class of car, by a somewhat prodigious kerb weight. The plug-in powertrain adds a substantial 360kgs over the weight of a 2.0 diesel 3008; or around half a tonne over a base petrol version. That's an awful lot of extra bulk to carry around and even with 520Nm of pulling power on tap, you feel that from behind the wheel, especially if you try and chuck this car about in the kind of manner a typical owner never would. You get four driving modes, with the one you'll be using most of the time being the 'Hybrid' setting that chooses the best mix of electric and petrol propulsion to suit the driving style whilst optimising efficiency. The alternative settings are either 'Sport' (where the car combines the power of the electric and petrol motors to offer livelier performance). And 'All-Wheel Drive'.

As usual with plug-in models, visual differentiations from standard variants are few. In this case, that means special dichroic badging on the boot and front wings, an extra filler flap and a cyan light that shines from the interior mirror when the car is in all-electric motion. Otherwise, this is like any other second generation 3008, which means it's very sleekly styled but, at 4.4-metres long, remains one of the more compact crossovers in the mid-sized SUV segment. Inside, the cabin as usual in this model is dominated by digital screens for the instrument cluster and the centre stack, embellished in this case by some extra hybrid-related displays and associated switchgear. As ever with a modern Peugeot, there's an 'i-Cockpit' dash design you'll have to get used to that leaves you looking over the (smaller) steering wheel at the instrument binnacle, rather than conventionally through it. Because this design was created from the outset to accommodate battery power, there's no compromise in rear seat accommodation and a couple of adults will be quite comfortable. But boot space is compromised considerably by the battery placement (down to 395-litres from 520-litre normally), though you do get an extra 25-litre area for storing the cables. The seats-folded capacity is 1,357-litres (down from 1,482-litres). And the fuel tank size is 10-litres smaller too.

Be prepared to pay quite a premium if you want plug-in hybrid capability for your 3008. You'll almost certainly be looking at the front-driven 225hp version because the more powerful all-wheel drive 300hp derivative is prohibitively expensive. Let's start with some perspective; diesel auto 3008 models start from around £30,000 - or around £33,000 with the top 2.0-litre BlueHDi engine. From launch, front-driven 3008 Hybrid pricing kicked from around £36,600 in base 'Allure' form: a couple of thousand more gets you 'GT Line' trim, while around £42,000 is needed for the top 'GT'. The aforementioned 300hp Hybrid4 model is offered in two forms; 'GT Line'-spec for around £43,500 and top 'GT' trim for nearly £47,000. Yes, really. So as you can see then, the value lies further down the range. In truth, you don't really need all-wheel-drive or an extra 75hp in this car - and base 'Allure'-spec gives you all the kit you could reasonably want. That includes a Connected 3D navigation system, 18-inch alloy wheels, keyless entry, a colour reversing camera, ambient lighting, power-folding door mirrors, keyless entry and all-round parking sensors. 'GT-Line' trim adds a contrast-coloured black roof, front fog lamps, full-LED self-levelling headlights, a wireless charging mat and sportier styling. And with top 'GT'-spec, you get leather upholstery, a surround view camera system, massaging front seats and a FOCAL premium hifi system.

Let's get to the figures. We've covered the 36 mile WLTP-rated all-electric driving range; it's actually more like around 25 miles in real-world use. And we also ought to apply real-world thinking to projections of likely fuel economy because the fantasy-land official combined WLTP figures (up to 222.3mpg for the Hybrid and up to 235.4mpg for the Hybrid4) clearly aren't likely to be replicated by the average owner. As a feather-foot, we suppose 80-90mpg might theoretically be possible but your realistic average is going to be much less than that - and certainly less than you'd get from the equivalent diesel model. Rely on the petrol engine alone and you'd struggle to average 35mpg. You might have noticed from this that the 4WD version is more efficient - and that holds true for WLTP emissions - rated at up to 39g/km for the Hybrid4 and up to 41g/km for the Hybrid. These figures will mean attractively low BiK figures (a 12% Benefit-in-Kind rate for the Hybrid4, as opposed to 27% for a 3008 GT diesel). At the time of this test in early 2020, that meant earners in the 40% bracket would pay £2,240 per year for the Hybrid model4, almost half what they'd have to find for the equivalent diesel variant. For a base 3008 Hybrid, company car tax could be as little as 10% in the 2020/21 period, rising only to 11% and 12% in the following two years. Bear in mind that you'll need to find £500 extra to upgrade your 3008 Hybrid to a model incorporating a 7.4kWh fast charger that would be capable of accepting charge from anything faster than a domestic three-pin socket. This halves charging time when charging with a typical garage 7kW wallbox. And it really ought to be standard. Charging the 13.2kWh battery takes 3 hours 45 minutes with a standard Mode 3 Type 2 cable - or 1 hour 45 minutes if the optional on-board charger has been fitted. You can use a provided smartphone app to set low-tariff charging times. And Peugeot is offering buyers six months free use of the Polar public charging network. Insurance groups vary between 26E and 28E for front-driven model and 35E for the Hybrid4 variant.

If you're looking for a new Peugeot 3008 1.6 Hybrid 225 Allure 5dr e-EAT8 Estate for sale, you've come to the right place. At Bristol Street Motors we don't just have the best Peugeot 3008 1.6 Hybrid 225 Allure 5dr e-EAT8 Estate deals, we also offer friendly advice and help with all your enquiries to ensure your buying experience is a happy experience.