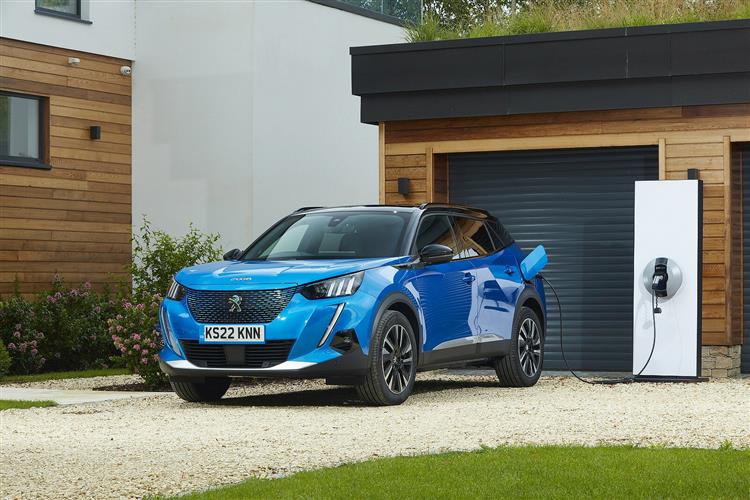 Peugeot's e-2008 delivers the full-EV formula to the smallest segment of the SUV market - and in a trendy, very lifestyle-orientated package. It looks snappy, does up to 214 miles between charges, has no practicality downsides over the combustion-engined version and comes with monthly payment finance you could justify. In short, there's plenty to like?

Peugeot obviously thinks it's going to sell quite a few e-2008s (the prediction is 20% of total model mix) because this powertrain is available with every trim level - there are four - 'Active Premium', 'Allure Premium', 'GT' and top 'GT Premium'. Prices start at just under £34,000 and run up to around £39,000. That puts this Peugeot in exactly the same ballpark as direct comparably-sized rivals like the Kia Niro EV and the Hyundai Kona Electric. Even the entry-level 'Active Premium' variant comes pretty well equipped, with 16-inch alloy wheels, rear parking sensors, a Thatcham category 1 alarm and a reasonable tally of camera safety kit. Inside in an 'Active Premium'-spec variant, there's air conditioning, a leather-stitched steering wheel, a trip computer and programmable cruise control with a speed limiter. Infotainment is taken care of by a 7-inch high definition HD capacitive colour centre-dash touchscreen featuring 'Apple CarPlay'/'Android Auto' smartphone-mirroring, Bluetooth and a decent quality 6-speaker DAB audio system. You'll need to stretch at least as far as mid-range 'Allure' trim to get the innovative 3D i-Cockpit instrument cluster: From 'GT' spec, you get Connected 3D navigation too. The top 'GT' and 'GT Premium' variants get unique styling and a contrast-coloured roof.

Peugeot's aim was for this all-electric SUV to have a total ownership cost roughly equivalent to what you'd pay to buy and run an automatic version of the petrol model: well it's some way of that right at present. Its drivetrain claims to be state-of-the-art for a small crossover, though its WLTP-certified range (quoted at up to 214 miles) is 11 miles down on an e-208 and is easily bettered by popular EV class choices like the Volkswagen ID.4 and the Skoda Enyaq iV. Bear in mind that as with all EVs, the quoted range figure will drop considerably in winter weather or over long motorway journeys - in the case of the e-2008 to around 135 miles. If you're an e-2008 owner, you'll need to know that getting anywhere near the quoted range figure will necessitate staying in the powertrain's provided 'Eco' mode - activating its 'Sport' mode setting will reduce your range by around 10%. What about charging your e-2008? With a wallbox in place in your garage, a full charge from empty will take seven and-a-half hours. With a public 50kW Rapid Charger, the replenishment time to charge from 15 to 80% is 45 minutes. If you're fortunate enough to find a 100kW Rapid Charger, that falls to 30 minutes. At the other extreme, if you happen to be somewhere you can only charge from a domestic supply using an ordinary 3-pin plug (and the optional 3-pin plug lead that costs extra with this car), the charging replenishment time would be a yawning 20 hours. As an e-2008 buyer, your dealer will also give you the option to pay a subscription for a so-called 'Mobility Pass'. That'll enable you to borrow a conventional petrol or diesel-powered car from the brand for those times when you might need to undertake a longer or more complex journey - holiday times for instance.