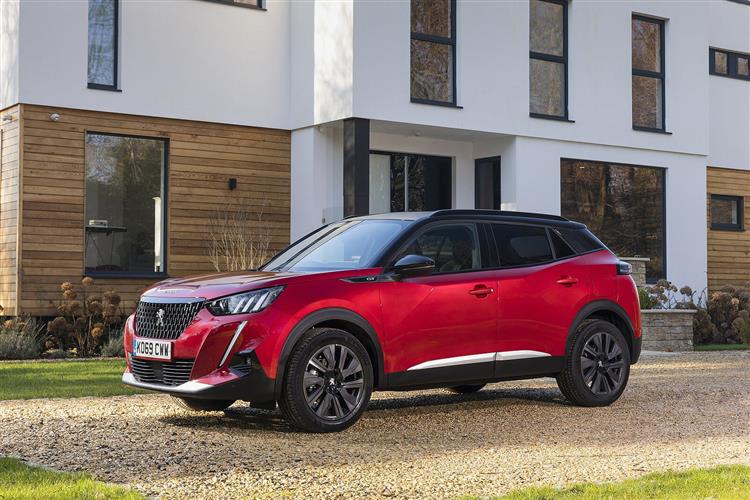 Previously, the 2008 wasn't the most affordable supermini-based SUV on the market - and it still isn't. Pricing sits in the £20,000 to £35,000 bracket. There's a choice of 'Active Premium', 'Allure Premium', 'GT' and 'GT Premium' trim. Peugeot expects the 'GT' variants to be particularly popular; these come with 18-inch diamond-cut alloy wheels, LED headlamps, a black tailgate spoiler, a contrasting black roof, a dark chrome radiator grille and a sporty body kit with a matte chrome chin spoiler and a faux diffuser. Inside, the 2008 GT Line gets a digital instrument binnacle 10-inch touchscreen infotainment system with TomTom navigation. Plus there's half-leather upholstery with lime green stitching, heated front seats, a leather-covered sports steering wheel, aluminium pedals, automatic air conditioning and an eight-colour ambient lighting system. Buyers also get a 180-degree reversing camera, a wireless smartphone charger, a voice recognition system, four USB sockets and 'Apple CarPlay'/'Android Auto' smartphone-mirroring. As you'd expect, a wide range of driver assistance and safety technologies are available this time round. Go for the auto gearbox (or an e-2008 model) and the adaptive cruise control system you can have has the ability to make the car automatically stop and go in heavy traffic. You can have this system with a manual gearbox too, where it operates down to 18mph. Lane departure warning, auto parking and blind spot monitoring systems are available too. Go for a variant with the largest 10-inch centre dash infotainment display and you'll get built-in navigation, plus 'Apple CarPlay'/'Android Auto' smartphone-mirroring.

The engines that have been announced for this 2008 are some of the most economical units that Peugeot make, so running one of these vehicles shouldn't break the bank. Expect the 1.2-litre PureTech petrol variants that most will buy to be very acceptably clean and frugal. With the 100hp manual model, you can expect to manage around 50mpg on the WLTP combined cycle and return an NEDC-rated CO2 reading of just over 100g/km, which is pretty good going for a car in this segment. The 1.5-litre BlueHDi diesel version of course does much better. Around 65mpg on the combined cycle should be theoretically possible, along with up well under 100g/km of NEDC-rated CO2. But of course if you're really interested in ecological efficiency, there'll be just one variant of this car that'll interest you, the all-electric e-2008. For this derivative, Peugeot claims a WLTP-rated driving range between charges of 214 miles. And fast charging at the rate of 100kW is available via a CCS socket hidden behind the fuel cap, with an 0-80% charge achievable in around 30 minutes. If you install a wallbox at home, you can recharge the battery from empty in around five hours if you have an 11kW electricity supply - or in around eight hours with a 7.4kW supply. Bear in mind that the e-2008 is around 350kgs heavier than the ordinary version.

If you're looking for a new Peugeot 2008 1.2 PureTech 130 GT 5dr Petrol Estate for sale, you've come to the right place. At Bristol Street Motors we don't just have the best Peugeot 2008 1.2 PureTech 130 GT 5dr Petrol Estate deals, we also offer friendly advice and help with all your enquiries to ensure your buying experience is a happy experience.