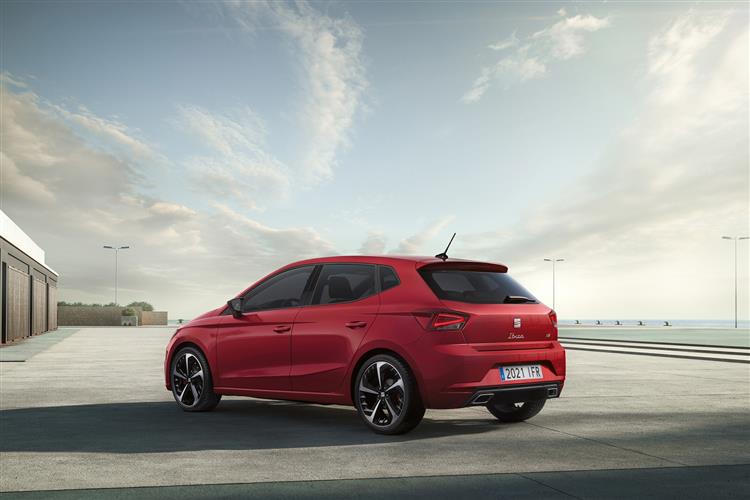 On the move in this Ibiza, SEAT hopes one of the first things you'll notice is this model's 'big car' feel, something particularly evident in its rigid, rattle-free roadgoing demeanour. In part, this comes courtesy of the stiff MQB A0 chassis. That in turn means flat cornering and benefits ride quality that's un-bettered in this class. We're slightly less sure about SEAT's decision to extend that same 'big car' feel to the steering which, as a consequence, is a tough lighter than some really enthusiastic drivers might like. The good news though, is that you still get enough feedback through your fingertips to keep you well informed on how well the front tyres are gripping on faster, twistier roads. Bottom line? If you'd ideally want a supermini with the spaciousness of a Skoda Fabia or a Honda Jazz and would like the sharp handling of a Fiesta and the supple ride of a Volkswagen Polo, you'll get closer to it with this SEAT than with any other class contender we can think of. SEAT has had a good look at the engine range. It's nearly all petrol-powered, things kicking off with the old 80PS 1.0 MPI unit at the foot of the range. Try your hardest to ignore this aging unit and graduate instead to the far-preferrable (and more economic) 1.0-litre TSI three-cylinder turbo powerplant which produces either 95 or 110PS. The feebler MPI engine gets a five-speed manual gearbox, with a six-speeder used further up the range, where there's also the option of 7-speed DSG auto transmission on the 1.0 TSI 110PS FR model. Diesels have now been dropped.

Prices haven't changed very much, so expect a price span in the £17,000 to £23,000 bracket, which means that, as before, you're getting Volkswagen Polo technology for a significant saving. Only five-door models are on offer and the trim lines run from 'SE' to 'SE Technology', 'FR', 'FR Sport', 'XCELLENCE' and 'XCELLENCE Lux'. As for equipment, well the full-LED headlights are a highlight. Plus most models get 'Apple CarPlay' and 'Android Auto'/'MirrorLink' 'phone connectivity, plus buyers can specify a premium 8-inch touchscreen and a wireless charger with a GSM amplifier. In addition, there's the chance to add in a thumping 300-watt 'Beats' Audio system with 7 speakers and an 8-channel amplifier. Other features buyers might want include keyless entry with a 'heartbeat' engine start button, front and rear parking sensors and a higher quality rear view camera. 'FR' and 'XCELLENCE' variants get colour-personalisable LED interior lighting too. Safety-wise, SEAT has added various new features to this revised model, though you'll need plush trim or an extra spend for most of them. There's the brand's latest 'Travel Assist' semi-autonomous driving system, which allows you to let the car do most of the steering, throttle and braking work on the highway and in traffic queues. There's also now 'Lane Assist', 'Side Assist' and 'High Beam Assist'. As before, the Ibiza can also feature 'Front Assist' autonomous braking and Adaptive Cruise Control.