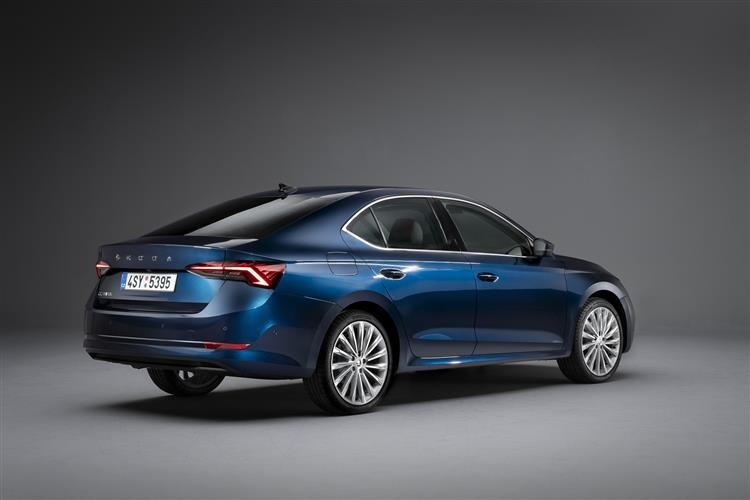 The powerplant range here has a familiar look if you're familiar with Skoda's borrowed Wolfsburg-sourced engineware. So things kick off with a 1.0-litre three cylinder TSI petrol unit offering 110PS that looks too feeble to propel a car of this size along with much alacrity but actually does surprisingly well. Choose the auto with this base engine and your Octavia will also come fitted out with the brand's latest 'e-TECH'-branded 12-volt mild hybrid engine tech. More on that later. Next up is the 150PS 1.5 TSI unit which, like the smaller powerplant, primarily uses a 6-speed manual gearbox but can also be had with a 7-speed DSG auto. The rarest petrol choice will be the 2.0 TSI 190PS unit that predictably can only be had with a DSG auto. Of more interest to likely Octavia buyers will be the various 2.0 TDI diesel options - there are 115 and 150PS versions of this four cylinder unit (the latter available with optional AWD). Plus there's a top 200PS biturbo version of this 2.0 TDI powerplant that has to be paired with DSG transmission and 4WD. As before, there's an SUV-inspired 'Scout' version of the estate body style complete with standard AWD and a slightly raised ride height. Like its predecessor, this MK4 Octavia uses the Volkswagen Group's MQB front wheel drive and All-Wheel Drive platform, but in this case the revised version of it that recently debuted on the new-era MK8 Volkswagen Golf.

Pricing isn't much different from before, so you'll be paying from just under £20,000 to around £35,000 for your Octavia, depending on your choice of hatch or estate body style, engine and trim. As usual with a Skoda, all variants get as standard a range of practical 'Simply Clever' features. In this case, that means a helpful AdBlue nozzle for diesel variants and familiar touches like an ice scraper secreted in the fuel cap and a ticket clip on the driver's side A-pillar. If you've more to spend, a 'Sleep package' can be added that'll give you more comfortable rear seat head rests, stowed blankets and sun blinds. Other extras include massaging front seats, a head-up display and Matrix LED headlights that adapt to the road and other vehicles. As you'd expect, camera-driven safety kit provision has taken a step forward. The brand's 'Collision Avoidance Assistance' autonomous braking system is, as expected, standard right across the range, along with lane departure warning featuring steering assistance and predictive cruise control, which works alongside an updated traffic sign recognition set-up. If you specify your car correctly, you'll find that the cruise control set-up can combine with Skoda's 'Lane Keep Assist' and 'Traffic Jam Assist' systems to provide for a degree of semi-autonomous driving.

The e-TECH system that features on Octavia 1.0 TSI petrol models fitted with DSG auto transmission is of course the same one we're increasingly seeing on various VW Group models. To recap, it pairs a 12-volt belt-driven starter motor with a small 48-volt lithium ion-battery, which stores energy that's recuperated under braking. The setup assists the petrol engine with a small electric boost, while also enabling this Skoda to coast with the engine completely disengaged at speed on the highway, improving efficiency and reducing CO2 emissions. Don't get your hopes up too high though, as to the effect all of this will have on your running costs. Experience with equivalent Audis has shown us that it doesn't make an enormous amount of difference. If a difference is what you want, then what you need is the Octavia iV (don't ask us why it's called that), which is the brand's first plug-in model in this segment. Here, a 1.4 TSI petrol engine combines with an e-motor fed by a 13kWh lithium-ion battery pack and, when the cells are fully charged, will enable an Octavia iV to travel for a WLTP-rated all-electric driving range of 34 miles.