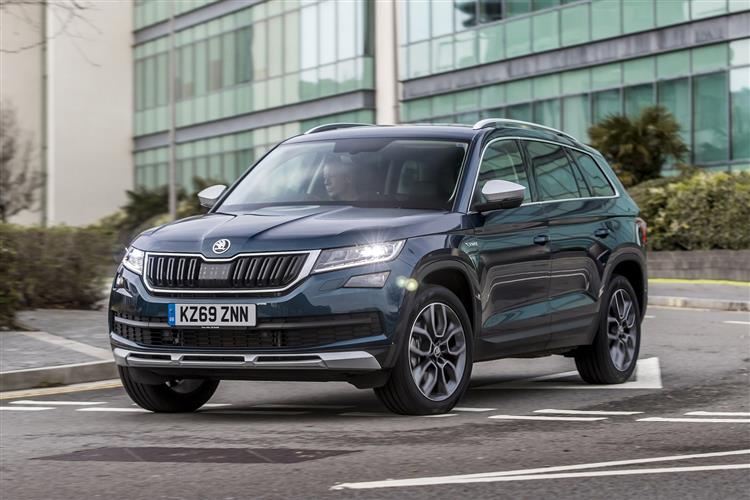 The mainstream Kodiaq engine range is built around three TDI diesel units and a further couple of TSI petrol powerplants. Most will want the 2.0-litre TDI unit, offered with either 150 or 190PS, with the pokier version able to accelerate this large SUV to 62mph in 8.6s on the way to 130mph. This 2.0-litre TDI also comes in 239PS twin turbo form in the top sporting vRS variant. The range of petrol engines consists of a couple of TSI units. The entry-level 1.5 TSI generates 150PS and 250Nm of pulling power. The top-of-the-range 2.0 TSI petrol engine develops 190PS with a decent 320Nm of torque. It'll be a rare choice though. Possibly of more interest than the engines on offer will be the 7-speed dual-clutch auto gearbox, an option to the standard 6-speed manual with some variants. An optional 'Driving Mode Select' system enables the driver to tweak throttle response, steering feel and auto gearshift timings, plus on 4x4 versions there's a 'Snow' setting that optimises things for off road use. Front wheel drive is mandatory on base petrol and diesel Kodiaqs and optional on the 1.5 TSI 150PS or 2.0 TDI 150PS derivatives. Most will want 4WD though and you have to have it on top petrol and diesel units that must also be coupled with the auto transmission.

Family-sized SUVs used to be thirsty things, but things have had to improve a lot as this market segment has become more popular. The efficiency performance of this Kodiaq illustrates that very well. All the diesel and petrol engines on offer here feature turbocharged direct injection and fulfil EU6d-TEMP emission standards. As you'd expect, all the powerplants feature a Stop-Start system, brake energy recovery and a powerful thermo-management set-up, contributing to low consumption. As a result, the 2.0 TDI 150PS manual model manages up to 44.8mpg on the WLTP combined cycle and 133g/km of NEDC-rated CO2. The 1.5 TSI 150PS variant manages up to 39.2mpg and 131g/km. The 1.5 TSI 150PS petrol unit uses the VW Group's 'ACT' (or 'Active Cylinder Technology') system that shuts down the second and third cylinders when the load and engine speed are low. The top-of-the-range 2.0 TSI petrol engine can't match that kind of cleverness, but it does feature a clever combustion process for high efficiency. All the usual measures are in place to improve frugality, including an 'Eco' mode on the 7-speed auto gearbox that allows the Kodiaq to coast at speeds above 12mph when the driver takes their foot off the accelerator. The all-wheel drive set-up is optimised for efficiency too, using a control system that when in overrun or at low load, directs drive via the front axle, which saves fuel.