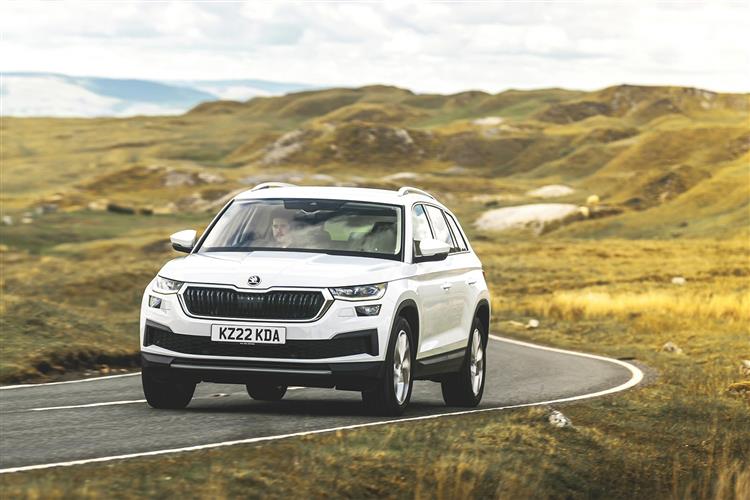 There are seven trim levels - 'SE', 'SE Drive', 'SE L', 'SE L Executive', 'Sportline', 'L&K' and 'vRS'. Prices start from just over £31,500 for a base petrol variant but if you want 4WD or almost any kind of diesel, you're going to be spending in the £35,000 to £40,000 bracket - or more. That's about the same kind of money you'd need for obvious family SUV rivals that offer a 7-seat options, cars like Kia's Sorento and Peugeot's 5008. Comparable mid-sized 7-seat SUV models like Land Rover's Discovery Sport and Hyundai's Santa Fe will cost you more. The top Kodiaq vRS performance petrol variant costs around £48,000. New options available with revised Kodiaq models include bigger 20-inch wheels, Matrix intelligent LED headlamps, cooled massaging front seats, a 'Virtual Cockpit' 10.25-inch instrument binnacle display screen and an enhanced Canton sound system. You might also want to look at upgraded the centre-dash infotainment screen from 8.0 to 9.2-inches. There's also the opportunity of using a 'Skoda Connect' package that gives you various online services, remote access to your car via a downloadable app and a 'Care Connect' system that provides emergency assistance. As for safety, well a 'Front Assist including City Emergency Brake' system is standard, using a radar to scan the road ahead for potential accident hazards as you drive. Adaptive Cruise Control, a 'Driver Alert' system to combat fatigue and a 'Traffic Jam Assist' system are all optional.

Family-sized SUVs used to be thirsty things, but things have had to improve a lot as this market segment has become more popular. The efficiency performance of this Kodiaq illustrates that very well. All the diesel and petrol engines on offer here feature turbocharged direct injection and fulfil EU6d-TEMP emission standards. As you'd expect, all the powerplants feature a Stop-Start system, brake energy recovery and a powerful thermo-management set-up, contributing to low consumption. As a result, the 2.0 TDI 150PS DSG diesel model manages up to 52.3mpg on the WLTP combined cycle and up to 141g/km of WLTP-rated CO2. It benefits from new 'Twin Dosing' tech that reduces NOx pollutants by up to 80%. The 1.5 TSI 150PS petrol variant manages up to 42.8mpg and 150g/km. The 1.5 TSI 150PS petrol unit uses the VW Group's 'ACT' (or 'Active Cylinder Technology') system that shuts down the second and third cylinders when the load and engine speed are low. The top-of-the-range 2.0 TSI petrol engine can't match that kind of cleverness, but it does feature a clever combustion process for high efficiency. All the usual measures are in place to improve frugality, including an 'Eco' mode on the 7-speed auto gearbox that allows the Kodiaq to coast at speeds above 12mph when the driver takes their foot off the accelerator. The all-wheel drive set-up is optimised for efficiency too, using a control system that when in overrun or at low load, directs drive via the front axle, which saves fuel.