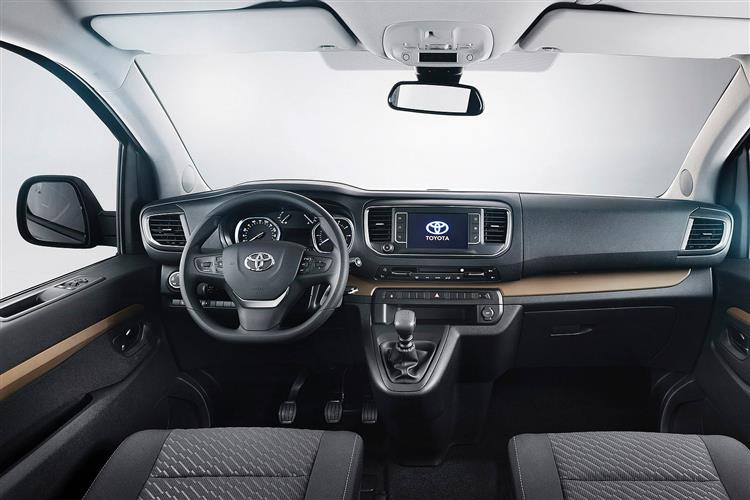 There are three main grades in the Proace Verso range: 'Shuttle', 'Family' (which is what we have here) and top 'VIP'. 'Shuttle' is a 9-seater available in medium or long body sizes; 'Family' is an 8-seater offered in 'Compact' or 'Medium'-length guises; and 'VIP' is a 7-seater available only in 'Long' form. Prices for the 'Shuttle' model start from around £33,000 and 'Family'-spec models like this one start at around £37,000. If you can't stretch to those kinds of figures, Toyota offers a more basic alternative in the form of its 'Proace Combi' model, which is offered in 'Medium' length, is a 9-seater and costs around £28,000 - essentially it's a basic minibus version of the Proace van. You're probably going to want to avoid the base 1.5-litre 120bhp diesel engine (only offered to Combi and Shuttle-spec buyers) and upgrade at least as far as the 150bhp version of the 2.0-litre diesel unit. Around £2,500 more gets you the 180bhp version of this 2.0-litre diesel powerplant mated to 8-speed auto transmission. All models feature a tailgate with a heater and rear wiper system, while in the cabin, whichever version you go for, you can expect to find curtain airbags, a multi-function roof and automatic dual-zone (front/rear) air conditioning. The Toyota Pro-Touch seven-inch touchscreen is the hub for the vehicle's infotainment system, giving clear and simple control of the eight-speaker audio with DAB tuner and the optional satellite navigation system. Smartphones can be integrated using Bluetooth, with connectivity also available via an Aux-in socket and USB port. Vinyl seat upholstery and the Toyota Safety Sense package (detailed below) can be specified as options.