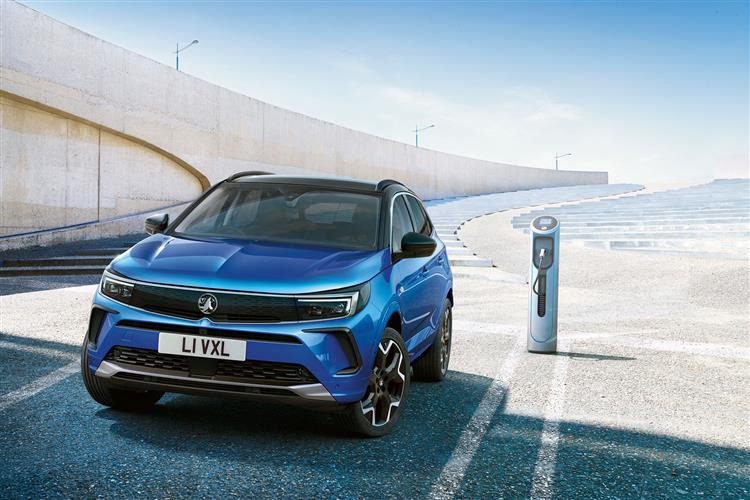 Vauxhall's Grandland mid-sized SUV no longer has an 'X' in its name - but does it still have the X-Factor? Well, it remains an affordable, well equipped mid-sized SUV and it now has a shaper look and a much more modern cabin. Plus if you happen to want a Plug-in Hybrid engine, it's still one of the cheaper options in its segment.

When the original version of this car, badged the 'Grandland X' was launched in 2017, it was quite a late entrant to the mid-sized SUV segment. Or that's what you might think anyway. Actually, Vauxhall competed half-heartedly in this sector for nearly a decade between 2006 and 2015 with its Korean-built Antara, which replaced the Luton-built Frontera model launched way back in 1991. Neither of these crossovers really hit the segment sweet spot though and neither was helped by brittle build quality that could charitably be described as 'patchy'. By the middle of this century's second decade though, Vauxhall had got on board with the kind of SUV modern family buyers really wanted, launching its supermini-based Mokka model in 2012 and shortly afterwards, entering into an agreement with Peugeot to share the engineering of two further contenders in this class, the original Grandland X model being one of them. Four years on, it shed the 'X' part of its badge and gained a smarter look both inside and out, creating the car we're going to look at here.

Engine-wise, this Grandland model hasn't changed much. As before, almost all sales will be of the 1.2-litre 130PS three cylinder petrol version, available either in manual or automatic forms. In manual form, it makes 10.4s en route to 122mph. The alternative is a 1.5-litre diesel, also with 130PS but only available with a manual stick shift; that manages 62mph in 12.3s en route to 119mph. Vauxhall doesn't think potential buyers in this segment really need 4WD - not even with the top Hybrid Plug-in model, which used to have it, but now doesn't. As before, this PHEV variant uses a 1.6-litre petrol engine, but there's just one electric motor mated to it in 2WD form, so the combined power output is 225hp. That gets you to 60mph in 8.9s and the top speed is 140mph (or 84mph in all-electric drive, which lasts for up to 34 miles between battery charges). As for drive dynamics across the Grandland range, well we'd anticipate that your expectations of a car of this kind when it comes to handling will probably be pretty modest. You'll want quite a commanding driving position, a comfortable ride, reasonable refinement, decently responsive engines and, well, that's likely to be about it. If you're after a C-segment SUV that you can throw around a bit, then this one certainly won't suit. Take a more typically relaxed approach though and everything becomes much more satisfactory. It soaks up bumps and tarmac tears that would trouble many rivals. Plus it's relatively quiet and easy to manoeuvre, particularly around town where the light steering that hampers you at speed becomes a boon.

As well as losing an 'X' (in its name), this Grandland gains quite a lot in terms of its adoption of the brand's far more interesting 'Vizor' trim detailing on the front of the car. This sees Vauxhall's latest Griffin logo proudly positioned in the centre, flanked by slim LED headlamps and more muscular bumpers. As before, the dimensions (nearly 4.5m of length, nearly 1.9m of width and nearly 1.65m of height) position this Grandland just above smaller mid-sized SUVs (like the Qashqai and the Ateca) and just below larger mid-sized models (like the Ford Kuga and the Volkswagen Tiguan). Avoid entry-trim and you get a contrast-coloured roof too. Inside, changes have been made with the adoption of Vauxhall's latest Pure Panel cockpit with two widescreen displays for more of a digital experience. Ahead of the driver is a display up to 12-inches in size, offering up essential information, while the central 10-inch display controls all infotainment via a touchscreen. As before, driver and passengers benefit from the elevated seating position typical of an SUV, which ensures good visibility in all situations. And this model's relatively long wheelbase provides decent space for up to five people, while the luggage compartment on conventionally-engined models (with a load volume from 514-litres to a maximum of 1,652 litres) should offer more than adequate room for luggage. Boot capacity falls to 390-litres with the Hybrid versions.

Interestingly, Vauxhall is refusing to drop diesel engines from the range, but black pump-fuelled Grandland sales will be quite rare. Even though the 130PS 1.5-litre diesel variant in question manages up to 54.3mpg on the WLTP combined cycle and up to 136g/km of WLTP-rated CO2. Most customers will choose the 130PS 1.2-litre three cylinder petrol model, which in manual form manages up to 45.6mpg and 140g/km - or up to 44.1mpg and 146g/km as an automatic. The PHEV Hybrid 2WD model of course, does a lot better - 192mpg on the combined cycle and 31g/km. Plus it can go 34 miles between charges that will take three and a half hours with the standard Mode 3 cable. You can reduce that to an hour and 45 minutes if you pay extra for your car to be equipped with the optional on-board charger. You'll also need to know that Vauxhall includes a three-year, 60,000 mile warranty as standard, a package that can be extended up to five years and 100,000 miles at extra cost. A year's free breakdown cover is also provided, along with a six-year anti-corrosion guarantee. Plus you can opt for a service plan that lets you pay monthly to spread the cost of regular work to your car. As part of this, Vauxhall offers discounts on wear and tear items, such as brake pads and windscreen wipers.