How The UK's National Parks Have Transformed For The EV Revolution

Due to the coronavirus pandemic in 2020, holidaymakers have chosen to stay at home this year and enjoy the natural beauty of the UK. In June, one booking was made every 11 seconds as Brits rushed to guarantee their place in popular staycation spots around the UK, with many opting to visit the country’s national parks. At the same time, there have been record electric vehicle (EV) registrations on an almost monthly basis. This leads us to ask the question: are the UK’s national parks ready for the influx of EVs into the region?

Only in February, it was reported that the Yorkshire Dales installed their first public EV charging points. This was after some motorists said that they were unable to visit the region due to not being able to charge their car. However, research by Bristol Street Motors has revealed that many national parks around the country are now ready and waiting to receive an influx of EVs in the near future.

Continue reading to find out more.

The number of public EV charging points has risen by 440% since 2015 across all 15 national parks. 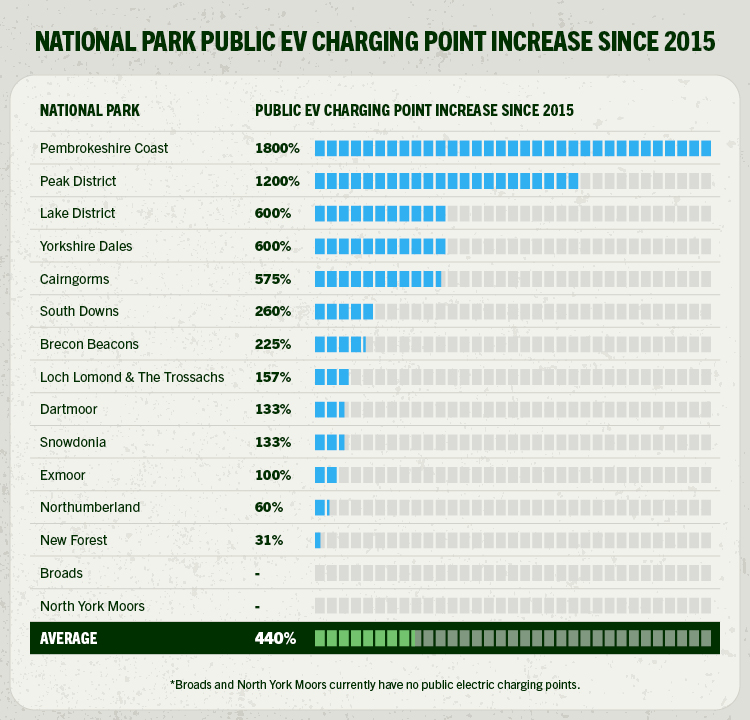 The great news for EV drivers is that since 2015, there has been a 440% increase in charging points on average across all 15 national parks. There’s an active push to install charging points in each region, as they hope to welcome EV drivers in the future without needing to worry where their next charge is coming from. The biggest increase is the Pembrokeshire Coast national park which had 1 public charging point in 2015 but now boasts 19. That’s a 1,800% increase.

Although the increase in public charging points is promising, is their currently enough to go around? We’ve outlined where each national park currently stands by analysing how many EVs per charging point there is in the regions on an average day. 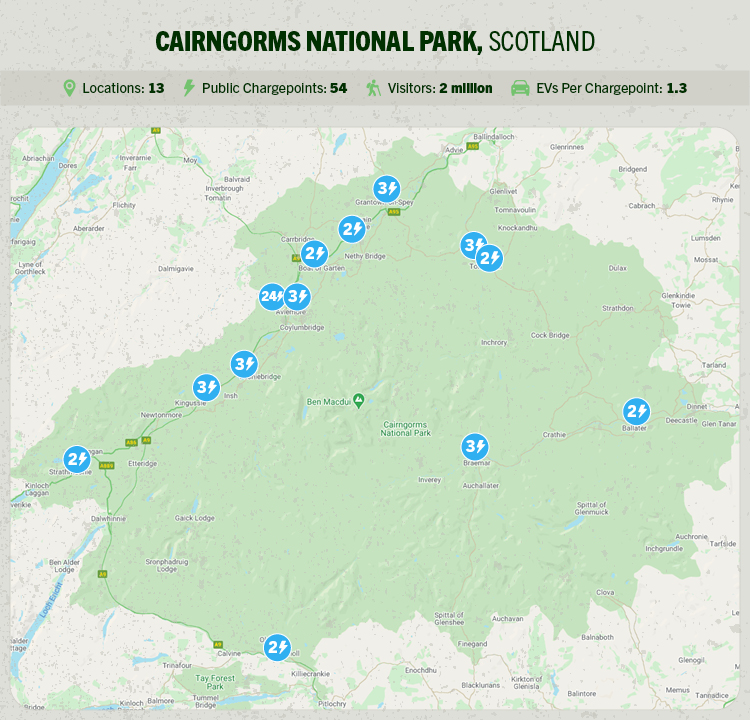 The Cairngorms, a popular mountain range and national park in the eastern Highlands of Scotland is currently best prepared to receive EV motorists. For every public charging point in the region, there are 1.3 EVs which is an outstanding total. This means that EV visitors will almost have a charging point of their own throughout their journey in the region.

A large factor in this is that the Cairngorms receives fewer visitors per year than many other national parks, therefore fewer charging points are needed in the region. However, it’s still an extremely impressive achievement and the area is an EV adventurers dream. Overall, you can find 54 public charge points in the region in 13 different locations.

Loch Lomond and The Trossachs
Scotland 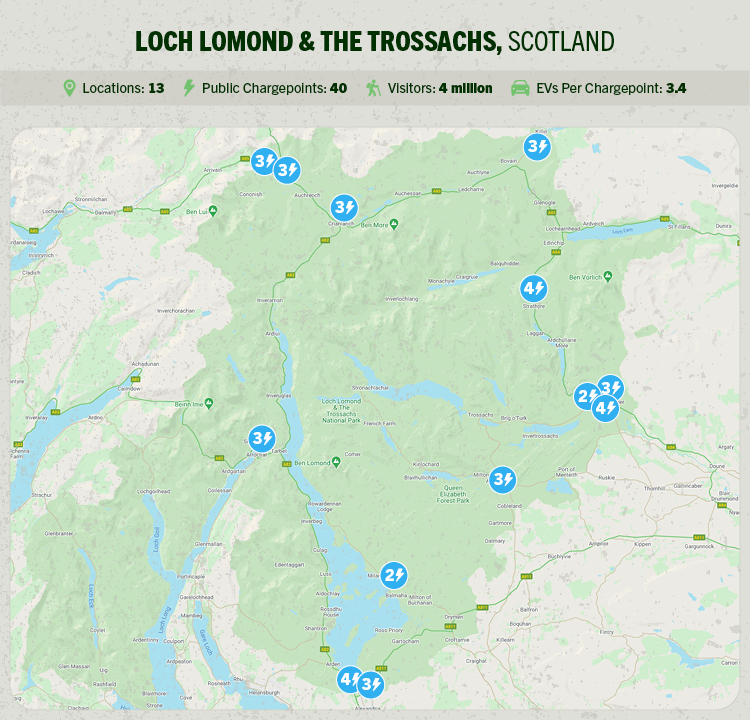 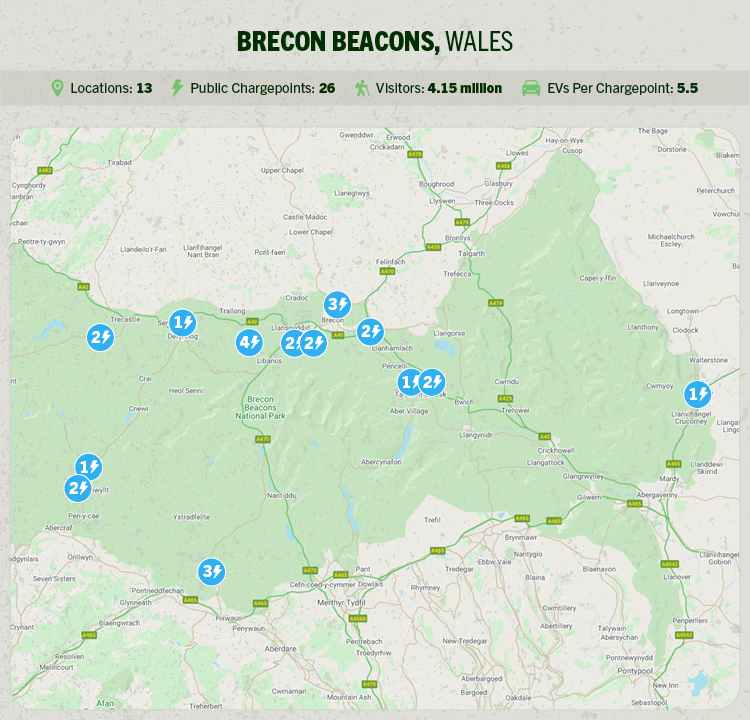 Brecon Beacons is 519 square miles in size and spans over mountaintops and moorland. In the region, there are 5.5 electric cars for every public charging point, which makes them relatively widely available. With the Brecon Beacons being in Wales, that means that no national park in England makes the top 3 of our EV friendly national parks list. 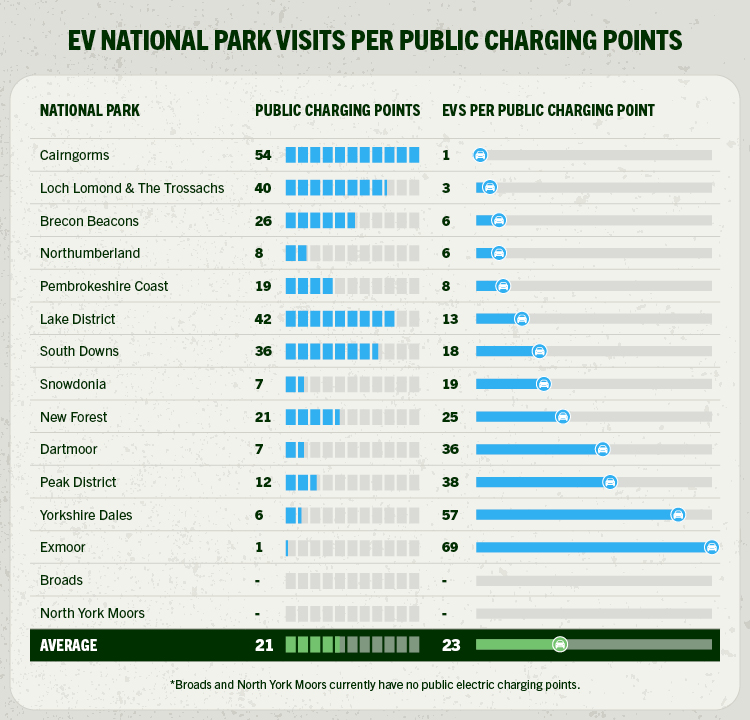 The national parks with the least amount of charging points are the Yorkshire Dales and Exmoor. Although the Yorkshire Dales has one of the highest visitors counts of 10m, Exmoor only receives 2m visitors per year which would normally mean there would be a low ratio of EVs to charging points, but not in this case. However, the positive side of this is with relatively low visitor figures, it would only require a moderate amount of public charging points to be installed to make the region more accessible for EV drivers.

The Broads and North York Moors are missing from the list due to there currently being no public charging points in those regions. 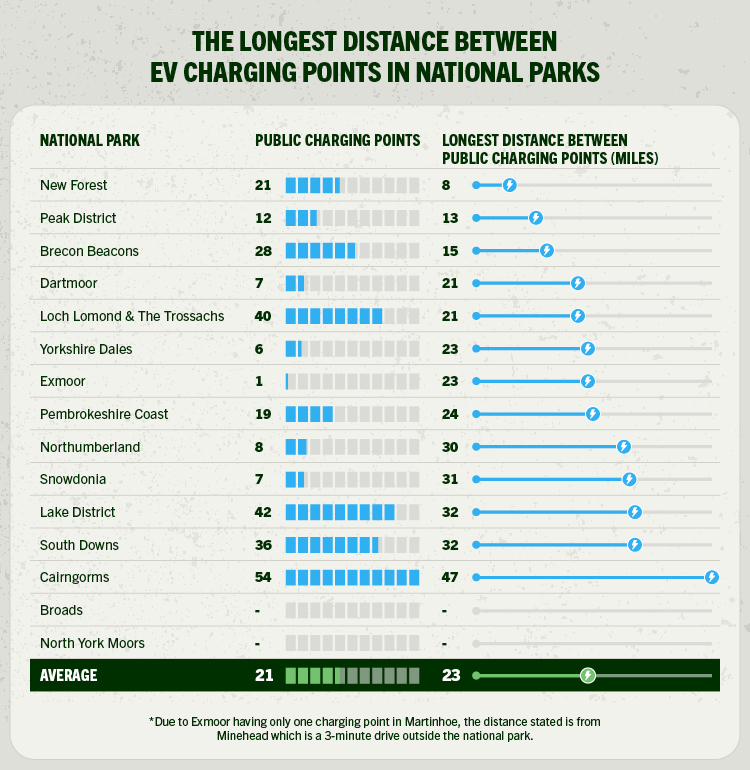 Due to some national parks having a relatively small amount of public charging points available, there is a large distance between them. This means it’s always a good idea to keep some charge in reserve to use if you should find yourself in a situation where you need to use a public charging point which is far away.

We’ve looked at all 15 of the UK’s national parks and measured the longest distance between two of the public charging points available in the regions. At Cairngorms, there are 46.7 miles between the public charging points at Braemar and Blair Atholl, the longest distance between points at any national park.

Here’s how we worked out the key data points.

Let’s take the Lake District as an example.

Firstly, we counted the number of public charging points in the region using the Zap Map, which in this case is 42. Using the filter, we discounted home and hotel/accommodation charging points, as we wanted to focus on those accessible to the public.

We then researched the number of visitors per year, which is 15.8m.

Assuming since some staycation-ers will holiday with only their partners, and some with their children, there would be around 1 car per 3 visitors. This means there is a total of 5,266,667 cars visiting the Lake District each year.

We then applied this same methodology to all of the national parks on our list. 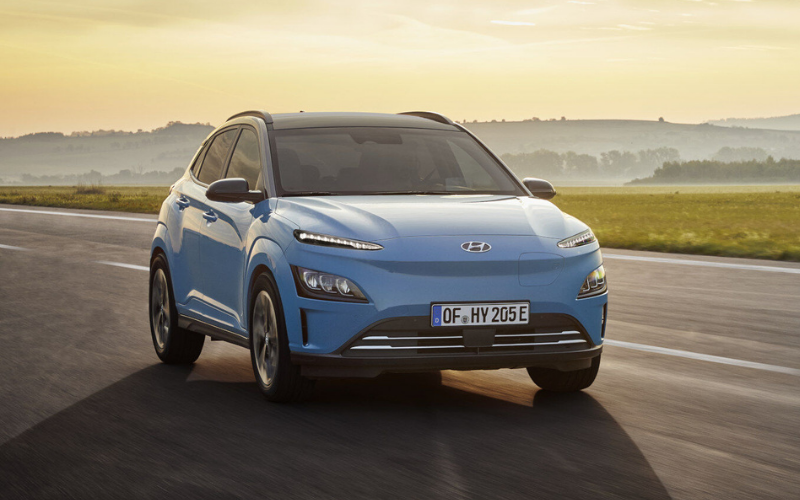 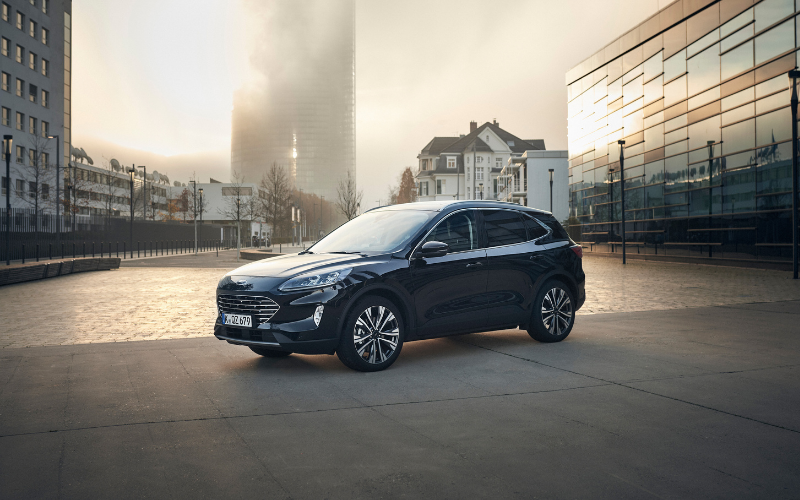 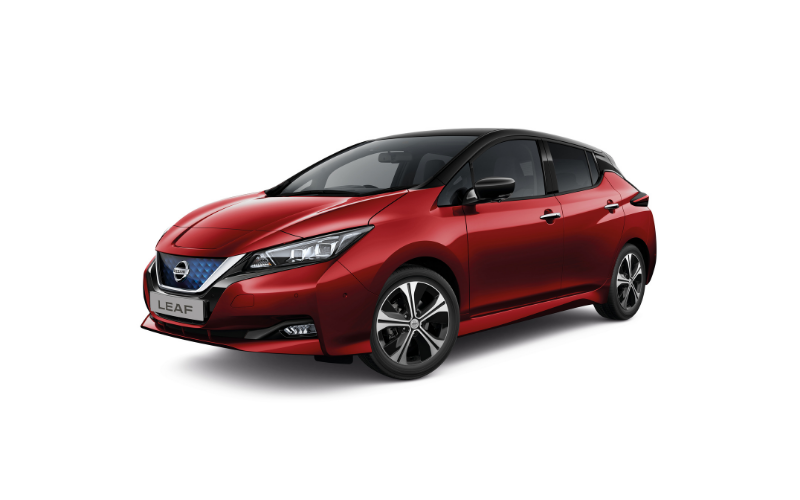 Production for the New MY20 Nissan Leaf Has Started 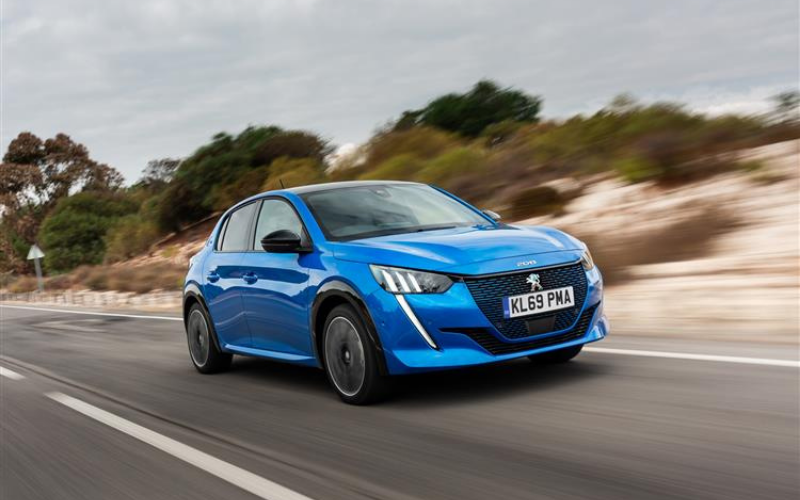