Generation Z and Generation Alpha, the umbrella terms for those born between 1995 and 2025, have landed right in the middle of the digital age.

Tech that was once only imagined in sci-fi series and big-screen blockbusters is now commonplace - be it touchscreens, digital watches or mobile phones that do a boatload more than they did when they first popped up in the 80s.

Motoring in particular is changing all the time and moving with the latest trends. Bristol Street Motors has pulled together research on bygone car features and what they've been replaced with.

Which of these features have you ever seen in or on a car? To get an idea on just how quickly car tech is changing, we surveyed 1,003 Gen Zers - those between 18 and 24 - on how many of the features they've seen.

It's perhaps unsurprising that winding windows, one of the more recent features on our survey, is the most recognised, with over 40% of respondents claiming they had come across them.

The second-most popular item, however, was ‘None of the above' - a staggering 40.7% of those surveyed said they'd never seen any of these items before. Not even an ashtray, baffling.

The cassette player perhaps would've been more obvious here, but before even that, in-car playlists were handled by eight-track cartridges.

Compact cassettes, which were roughly a third of the size, unsurprisingly replaced those in the 70s, until CD players took over in the late 80s and early 90s.

Younger readers, however, won't know much about those. They're more accustomed to Bluetooth or aux cables, the “old fashioned” alternative. This one's as much a reflection of changing attitudes on smoking as it on motoring. The UK's ban on smoking in public places in 2007, and the 2015 ruling that made it illegal to smoke in a vehicle with anyone under 18, led to a rethink for car manufacturers.

The cigarette lighters remain - presumably as dashcams and the like require the port - but ashtrays have taken the fall.

The storage space it leaves behind is probably ample enough for a vape machine, though.

Agatha Christie once said that invention “arises directly from idleness”, and maybe even “laziness”. Never a truer word spoken, in the case of winding windows.

Before electric windows, dropping the glass for a bit of breeze was little short of a light workout. In much the same way as the first motorists would wind up their carriage-like automobiles (also mentioned below) before getting underway, winding windows were operated with a spinning lever.

Nowadays, you'd be hard pressed to find a brand-new motor that didn't come with electric windows as standard. Younger drivers and passengers might never know the struggle. 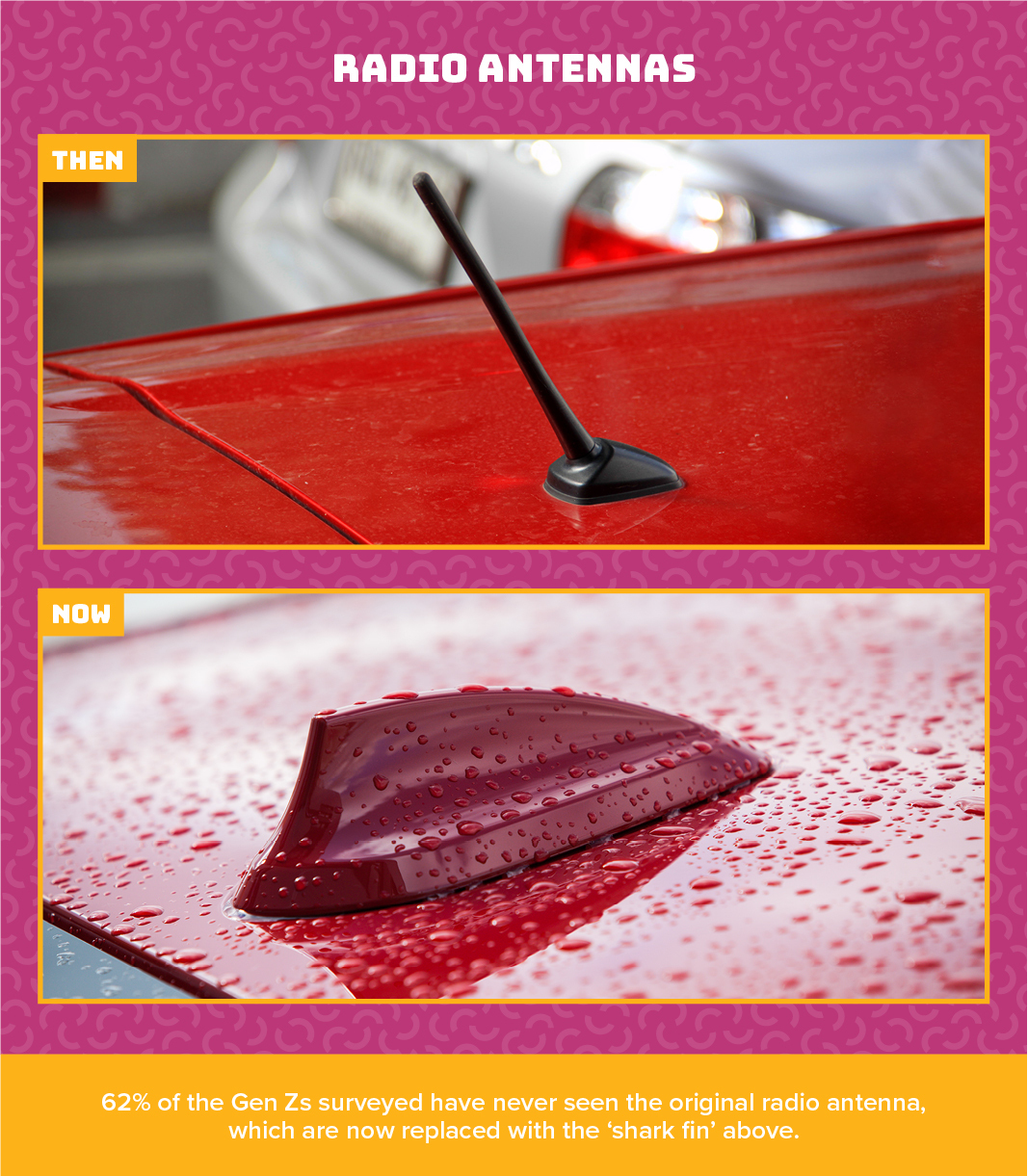 This is another feature that's been replaced relatively recently. Originally, the only method of in-car radio was to use an antenna long enough to make your motor look like a dodgem.

At one point, they were so long they needed retracting at the end of a journey. Fast forward (quite) a few years, however, and the necessary components are instead hidden inside a ‘shark fin'.

Usually found at back of the roof panel, the fin-shaped housings are much subtler.

Peer at the front seats of parked cars and wagons and you might still spot the odd beaded seat cover.

Perhaps most useful for those who do a lot of driving, like taxi and lorry drivers, the beads allow for greater air circulation while at the wheel.

But, unless you're driving a Bentley or Rolls-Royce, wooden interiors aren't a frequent find anymore, and the beads have made way for more modern alternatives. 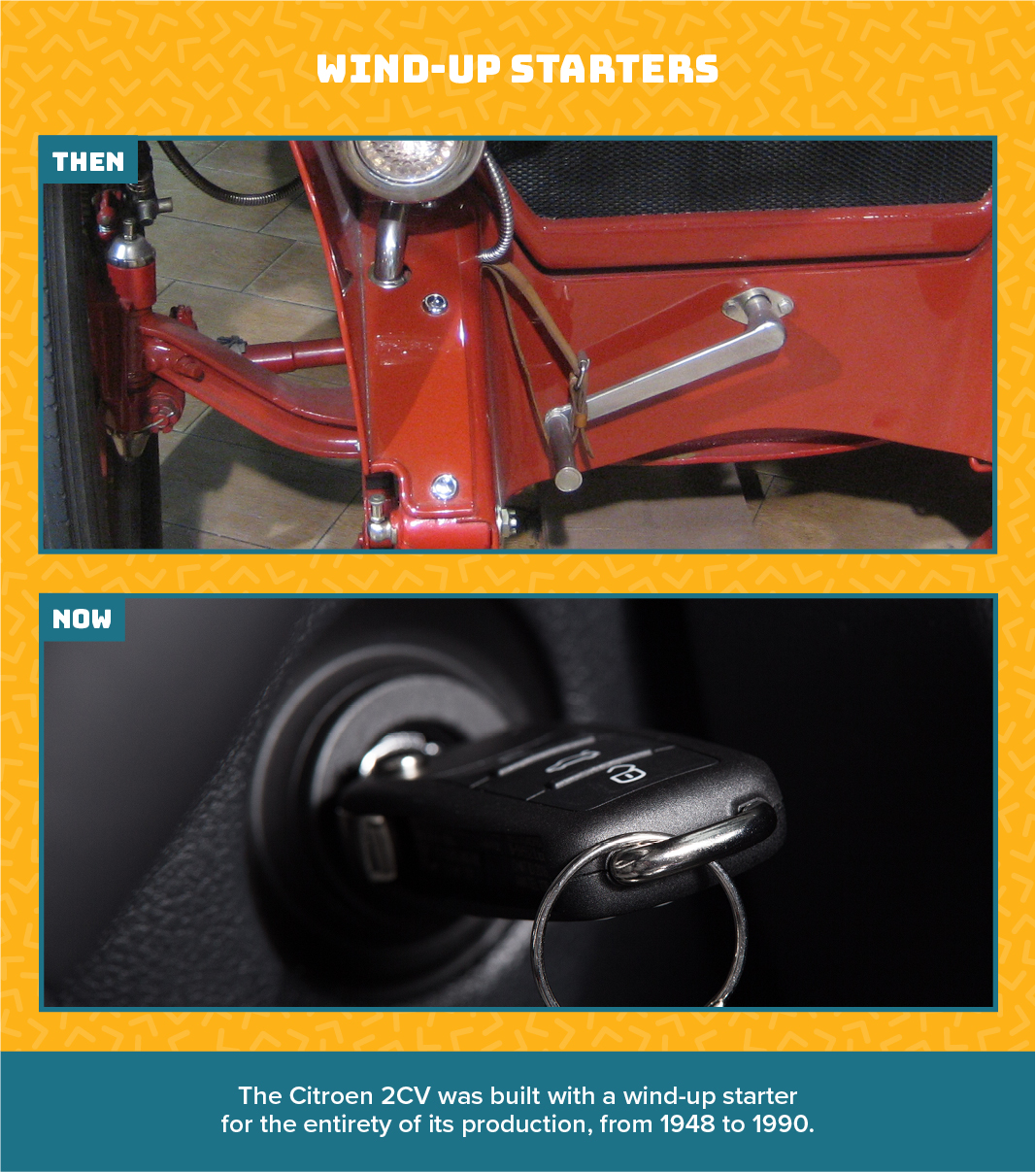 Gen Alphas and Zers aren't alone on this one; even Millennials are probably just as unaware that starting a car once involved manual labour.

Before the starter motor, which provides the initial crank to get an engine going, the action was performed manually by the driver. But despite being seen as a long-forgotten car component, starting handles were found on some models, like the Citroen 2CV, as late as the 90s.

Today's convenience of simply switching the key or pressing the start button is worlds away from the original method. That Agatha Christie quote comes to mind.

Before they made the switch to the doors, a car's wing mirrors were often found exactly there, on the panels above the front wheels.

Also called side or side-view mirrors, they're more commonly known as wing mirrors, despite very few, if any, current examples that sit anywhere other than on the doors or A-pillars.

Some cars, such as the Audi e-tron and Honda e, have even made the switch to digital mirrors, with rear-facing cameras that relay the image to small screens just inside the doors. As a feature that began being phased out in the 50s, these might also be a revelation to one or two generations before Zers.

Indicator arms - formally trafficators - were signals that dropped from a car's side to indicate which direction it would be turning.

As a much simpler alternative, it's easy to see how modern indicators, as flashing amber lights, caught on. Manufacturers such as Audi have even tried to modernise these, replacing the blinking lights with a pulsing LED line that moves left or right.

Although not a feature as such, it's a more than valid example of motoring's modernisation.

Where the co-pilot was once an irritated front-seat passenger holding an A-Z upside down, it's now a calm and collected voice coming from a small box on the dashboard.

We still recommend keeping an old-fashioned map in the boot, just in case, but the invention of satnavs is one that we can't oppose. Increasingly, manufacturers are throwing them in as standard with infotainment systems, and they're now even a part of UK driving tests. 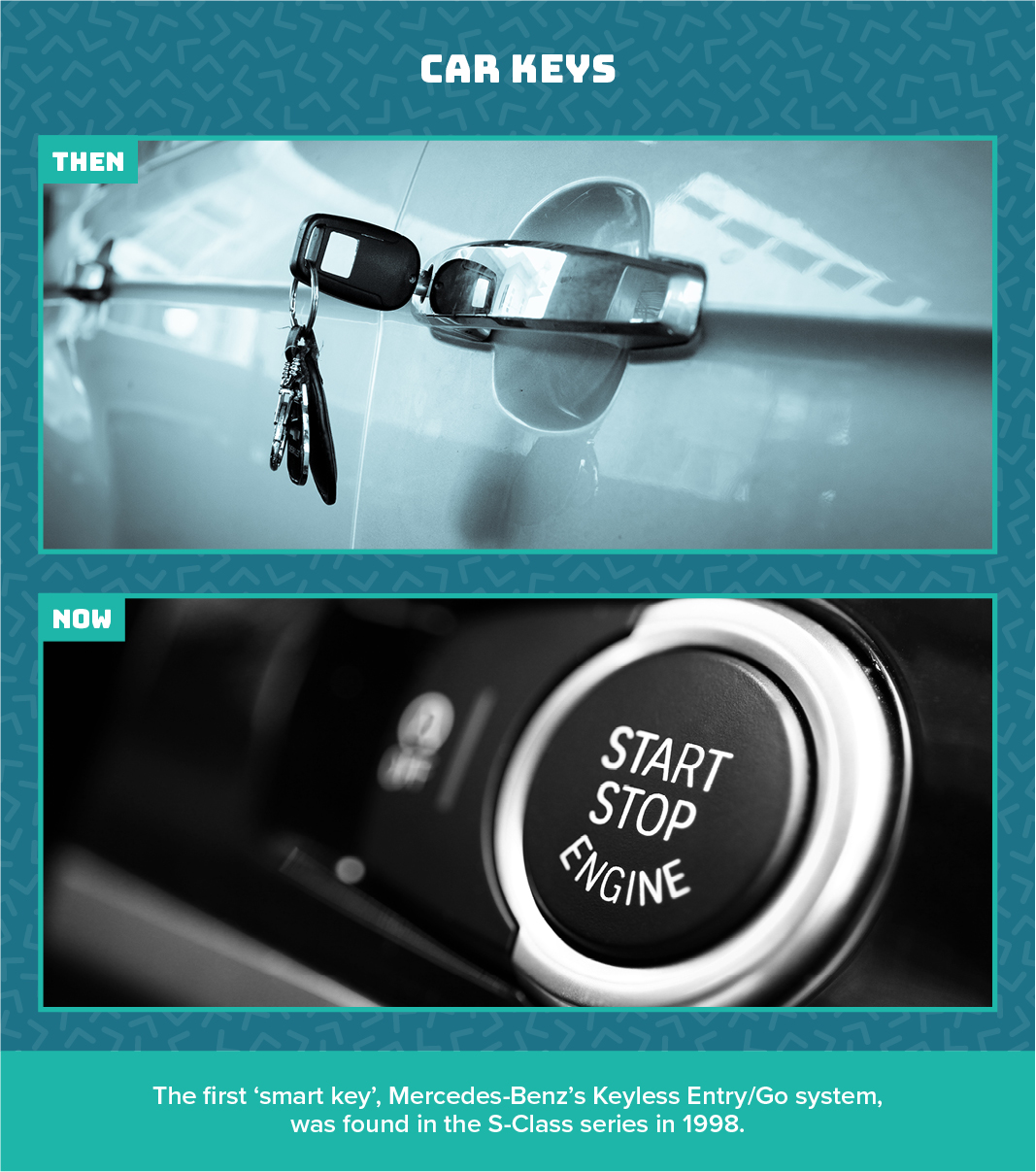 The switch from key to keyless marked a space-age step towards effortless motoring.

Gone are the gripes of manually unlocking the doors and sticking the key in the ignition; drivers can now jump in the car and start it up without even taking the fob from their pocket.

Despite only becoming a common fixture in recent years, the ‘smart key' first appeared over two decades ago. Known then as Keyless Entry/Go, it was introduced in 1998 on the Mercedes-Benz S-Class series.

For more industry news and blog features, make sure to bookmark the Bristol Street Motors Newsroom.