'The most outstanding small car the world had ever seen.' That was the aim when, back in 1972, Henry Ford II gave the green light to the car that would become the Fiesta.
Bristol Street Motors

Well, in the case of the Ford Fiesta, quite a lot, actually. The Fiesta, meaning ‘Party’ in Spanish, has had a history as lively and euphoric as its name suggests. Over its 40 year run, the Ford Fiesta has grown to become one of the most instantly recognisable cars on the UKs roads. It’s perhaps one of the nations favourites too, with car buyers young and old giving in to the Fiestas charms. The Fiesta picked up a wealth of awards ranging from the UK Design Councils ‘Efficiency Award’ back in 1978, all the way to winning the 2016 Car of the Year award at WhatCar, with countless more in-between. But how did the humble Fiesta build such a lasting legacy?

‘The most outstanding small car the world had ever seen.’ That was the aim when, back in 1972, Henry Ford II gave the green light to the car that would become the Fiesta. The goal was to create a car with a longer wheelbase than the current offerings by competitors, while
staying shorter than the Ford Escort. Not one to rest on his laurels, Ford committed to producing 500,000 Fiestas every year, and opened new factories in Valencia, Spain; Bordeaux, France; and Dagenham, England.

At that point, the car was known as the Bobcat, as the Fiesta name was held by General Motors and the Oldsmobile Fiesta. Other names thrown around for the iconic hatchback including the fairly ill-suited ‘Bravo’, which was vetoed by Henry Ford II in favour of Fiesta, which was granted to Ford free of charge.

The Fiesta was unveiled to the world at the 24 Hours of Le Mans in 1976, and delighted drivers worldwide with the exception of UK motorists, who were left chomping at the bit until 1977, when the car finally arrived on British shores with a right hand drive version.

The Ford Fiesta hit the UKs roads to a chorus of applause, dove headfirst into bestseller lists, and has remained there ever since. Over the next 4 decades, the Fiesta would undergo an almost complete metamorphosis, while still retaining the characteristic flair and performance that made it such a runaway success.

Each new iteration of the Fiesta brought about new improvements, with Ford constantly refining their winning formula to grow the car’s appeal across the market. The Fiesta Mk2 introduced a diesel option, and the Fiesta soon became a byword for fuel economy. The Mk3 was the first Fiesta 5-door version of the model, winning over not just families but What Car? Magazines ‘Car of the Year’ 1989. The Mk4 was Britains best-selling car from 1996-98, thanks to its revolutionary new body style and now-iconic curves. In 2001, Britains best-selling supermini was the Fiesta Mk5, face lifted with crowd pleasing design cues taken from the much-loved Ford Focus.

The Fiesta Mk6 was sold and produced 2002 and 2008, retaking the crown as Britains favourite supermini in 2006-7. The Mk6’s new advanced on-board tech made it one of the most useful (and affordable!) cars around. The Mk6s gadget wizardry consisted of tech including power folding mirrors, automatic windscreen wipers, trip computer, and voice controlled Bluetooth, to name but a few, attracting a new tech savvy set of drivers.

In 2008, the Mk7 was produced, arriving to resounding critical acclaim, and winning itself a bulging sack of awards in the process. In 2014, the Mk7 became Britains best-selling car of all time, having sold 4,115,000 in its then-38 year lifetime, appealing to generation after generation of car drivers.

At this point, youve probably read enough to realise that the Ford Fiesta is fairly popular. But what is it that drivers young and old, new and experienced, love about it?

Well, the Ford Fiesta Mk7s design is a uniting factor for drivers from all walks of life. Its sleek exteriors and eye catching styling means that the car suits every kind of driver, looking smart, bold and fresh all at once. The commitment to offering exteriors sleek enough to appeal to new drivers, whilst functional enough to fit new drivers, families and older drivers alike is perhaps one of the main reasons the Fiesta has remained such a common sight on the roads; it really is a car for the whole family to enjoy.

What’s more, no comfort or space is sacrificed to achieve this image. The Ford Fiesta is a revelation to drive, breathing new life into driving thanks to its steering wheel controls, in-car entertainment system, and much-loved economic engine options, especially the 1.6L Duratorq TDCi diesel. The ST trim has received much praise as well, named as Top Gear’s Car of the Year in 2013, with an engine capable of 0-62mph in a mere 6.9 seconds.

Of course, there’s perhaps an even bigger factor than the crowd pleasing styling, commitment to new tech, and fuel economy keeping the Fiesta a common sight on the road  its affordability. A Ford Fiesta is one of the most affordable new cars around, from the initial purchase price, to the economical running costs, to the crowd pleasing insurance costs; the Ford Fiesta ticks the boxes for a wide range of buyers. Plus, at Bristol Street Motors, we take pride in making one of the most affordable cars on UK roads even more affordable, with hassle free financing options, contract payment, and leasing deals.

With such a glittering history behind it, and with new trims and styling options regularly released, it looks like things are only going to get better for the plucky little subcompact. Ford Fiesta, we salute you.

Whether you’re looking for your first motor, a family car, or a vehicle with real history, why not take a look at the Ford Fiesta deals we can offer you at Bristol Street Motors, and let us help you on your new car journey today. 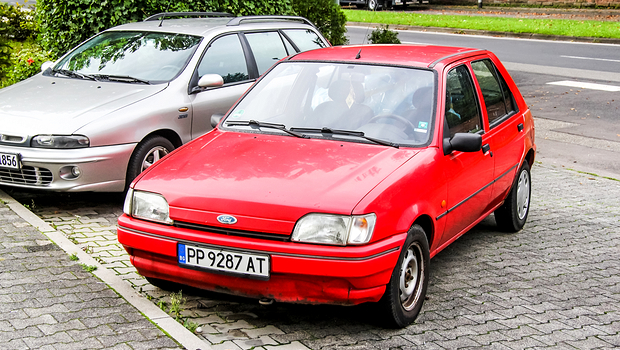 The History of the Ford Fiesta