The popular vehicle, which is the first model to fully embrace Mazda's state-of-the-art SKYACTIV technology, was described as being "one of the finest diesels" that money can buy.

"It has walloping low-down torque, yet is supremely flexible and happy to rev," the magazine went on to say.

"There's bags of room for four tall adults, the boot is huge and the rear seats fold down easily.  With low running costs, headline-grabbing figures, including remarkable CO2 emissions of just 119g/km and you end up with an unbeatable buy."

One of the highlights of the model, which has set it apart from others, is its two-stage turbocharger engine. It has the ability to eliminate the response lag that is often prevalent in such engines.

"When we introduced the Mazda CX-5 last year, we predicted that it would transform the SUV marketplace in Britain," commented Peter Allibon, sales director at Mazda UK.

"Public reaction to the CX-5 has been immensely positive and numerous media tests have shown it consistently beats all class rivals. We anticipate continued strong demand for our compact SUV throughout 2013 and beyond." 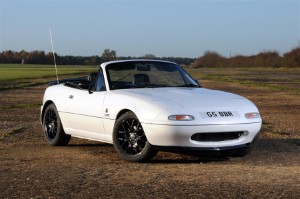