The main difference between the current and forthcoming Accord are the improved security features, it has been claimed.
Bristol Street Motors

New Honda Accord will be 'safe as houses'

Top level safety features now come as standard on the Honda Accord, one reviewer has claimed.

Testing the 2012 model of the car in Dubai, Sony Thomas, of wheels magazine, claimed the main difference between the 2012 Honda Accord and the one before is the enhanced safety features.

According to Mr Thomas, the Japanese manufacturer has stolen a march on its competitors by including top level safety features on the basic edition of the 2012 Accord.

Included in the many safety features of the entry-level Accord are no fewer than six airbags.

"If car manufacturers want to differentiate between their trim levels, they should do it with dispensable features like leather and wood, automatic lights and wipers, the number of speakers, and not with something essential as safety," the expert commented.

"Fortunately, someone at Honda appears to have spared a thought for the less affluent car buyer. In what's nothing less than a groundbreaking move, the Japanese carmaker has shown others the way with the latest iteration of its popular saloon." 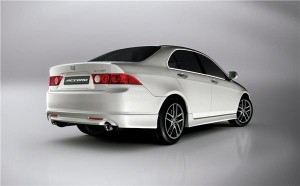 Prototype Honda Accord debuted as SEMA