Mazda has revealed its 5 vehicle will bear a new, sleek appearance when it is unveiled this autumn.
Bristol Street Motors

New Mazda 5 gets an image upgrade

A new design has been applied to Mazda's people carrier 5 model.

The new Mazda 5 is set to be unveiled in autumn, with designers telling motoring resource headlineauto.co.uk that it was tricky to make the previously boxy model more streamlined.

According to the designers, the vehicle now looks lower and slimmer, giving off a sportier vibe.

It is set to be launched in the UK with the option of a 2.0-litre direct injection petrol powertrain with Mazda's stop-start system, or a 1.8-litre petrol version. A diesel alternative will follow shortly afterwards.

Programme manager Hideki Matsuoka told the website that the new Mazda 5 is aimed at young families in their 30s.

Price will be a priority for this demographic, he said, adding: "But the car also has to be practical, emotional and elegant."

Government figures put the Mazda 5 in the top spot in terms of efficient minivans. 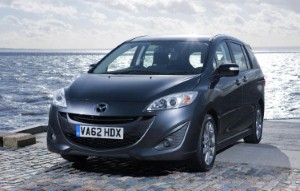