As you would expect, people grow very attached to their cars. In many ways, the car you drive is an extension of yourself, from the skill with which you handle your vehicle to your temperament on the road. People are so fond of their cars, in fact, that they like to personalise them. Unfortunately, however, this usually has a similar effect to putting sunglasses on your pet dog: amusing for a short while, then awkward.
Bristol Street Motors

As you would expect, people grow very attached to their cars. In many ways, the car you drive is an extension of yourself, from the skill with which you handle your vehicle to your temperament on the road. People are so fond of their cars, in fact, that they like to personalise them. Unfortunately, however, this usually has a similar effect to putting sunglasses on your pet dog: amusing for a short while, then awkward.

We’ve put together a list of the top ten most head-scratchingly, eyebrow-raisingly peculiar car accessories that have circulated over the years. Feel free to tick off any you own along the way. If you get full marks we like your style. 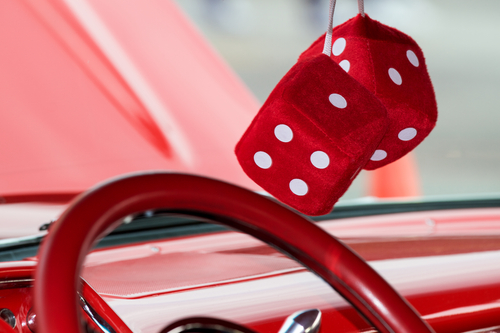 If you’re a character in a 1970s TV show about cops screeching around San Francisco, you might be able to pull these off. If, however, you are an accountant stuck in traffic on the M25, a pair of dangling fluffy dice obstructing 25% of your view of the road is not the way to go.

Of the many odd alloys available, wheel alloys shaped in the form of a child’s teddy bear are perhaps the most visually offensive. At the low price of just £100 per wheel though, can you really afford not to have them?

If drifting around Tokyo car parks is a hobby, then installing fifteen blinding neon rods around your car to give it a radioactive glow might be in your best interests. Otherwise, put the electric blue bulb down and back away from the Fiat Punto.

Cleverly invented to make it look like you’re still driving even when you’re stopped, spinning rims are a favourite in music videos featuring swimming pools, gold teeth, and lyrics about how great it is to have a lot of money. For maximum effect, combine spinning rims with dollar-sign alloys. Do you want to give people the impression that your car is driving so fast that its actually on fire? If so, you need to invest in car stickers. Car stickers range from anything from flames, to skulls and cobwebs, to bullet holes.

Yes, these really existed, way back in the middle of the 20th century when safety wasn’t invented yet. Simply load a packet of cigarettes into the dispenser, and marvel as it shoots out burning cigarettes at your command. Fool proof.

Everyone hates the desperate drive home after work, stomach growling, fantasising about pulling open the fridge and being bathed in its golden glow. With the in-car microwave, you need never worry about rushing home again. Simply sit in the car park, pop in a burger, and enjoy a nutritious meal in the backseat of your car.

Young people go through a lot of crazes, whether its fashion, music, or language. In Oakland, California, in 2002, young drivers took up the craze of adding ‘whistle tips’ to their car exhausts. The process essentially involves welding a piece of metal inside the exhaust to cause it to emit a shrill scream when you accelerate. But why would young drivers want this? Well no reason at all, apart from to annoy local residents. They were swiftly banned.

One of the most commonly seen offenders on this list, the practise of gluing huge novelty eyelashes onto your cars headlights is surprisingly frequent. Whether the desired affect is to make the car look pretty, we’re not sure. More often than not, though, ‘carlashes’ transform a car into a giant metal Mr Blobby lookalike.

Waiting in heavy traffic can be boring. Rather than listen to the radio or make conversation with any passengers, instead break the monotony by having a whale of a time playing with a novelty in-car siren. Novelty sirens allow you to project a variety of bizarre noises from your car, with many sirens allowing you to produce high decibel animal noises, musical honks, and wailing klaxons. If you think of them as emojis for cars, they suddenly make much more sense. See a motorist who has left their indicator on? Let them know with a friendly ‘moo’ at a hundred decibels.