Renault has introduced its Efficient Dual Clutch transmission on its city car, Twingo. The automatic gearbox will be available on the TCe90 engine.
Bristol Street Motors

Renault has introduced its Efficient Dual Clutch transmission on its city car, Twingo. The automatic gearbox will be available on the TCe90 engine.

EDC is an automatic dual dry clutch transmission, doing without the need for a clutch pedal. Gearshift control consists of a 'P-R-N-D' layout, with the addition of an 'up/down' shift mode.

Available for £900 more than the equivalent manual version, the introduction of the EDC transmission promises a comfortable journey due to the rapid shift time of 290ms. The gearbox's 'creep' control also aids the driver in crawling traffic, pulling away slowly when the brake pedal is released. EDC also boasts Hill Start Assist as standard.

The Twingo EDC's 0.9-litre turbo engine is also available with Renault's ECO mode, which lowers fuel consumption by up to 10 per cent. Activated by the driver, the mode enables gear changes at lower rpm.

Alterations have also been made to the Twingo's specification, with six-spoke 15 inch 'Ariane' alloy wheels becoming standard on Dynamique models. Buyers will also be able to choose from the option of having extra-tinted rear windows on Dynamique and Dynamique S trim levels. 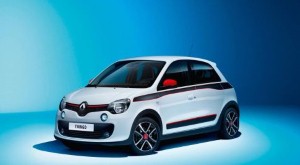