We might not be in the office as often thanks to hybrid working, but it’s good to get back to bustling city centres and catching up with our colleagues in the workplace.

So, with this in mind, we’ve crunched the numbers to work out which of the UK’s largest cities is best for commuters.

Considering everything from parking costs and the availability of spaces to fuel prices and how busy train stations are, we’ve ranked the cities based on what matters most for commuters looking for a cheap, easy and stress-free journey to work.

We've calculated a ‘Commuter Score’ for fourteen of the UK’s largest cities by ranking several factors, from parking spaces to fuel costs. The cities were ranked from 1-14 for each factor to give the overall commuter score; the lower the score the better the city is for commuters.

Read on as we reveal the results...

Newcastle is the UK’s best city for commuters

It’s good news for Geordies; Newcastle has come out on top as the best city in the UK for commuters.

Helping the city secure the top spot was low parking costs (the third lowest in the country), a quieter train station and the lowest petrol and diesel fuel costs in the country. 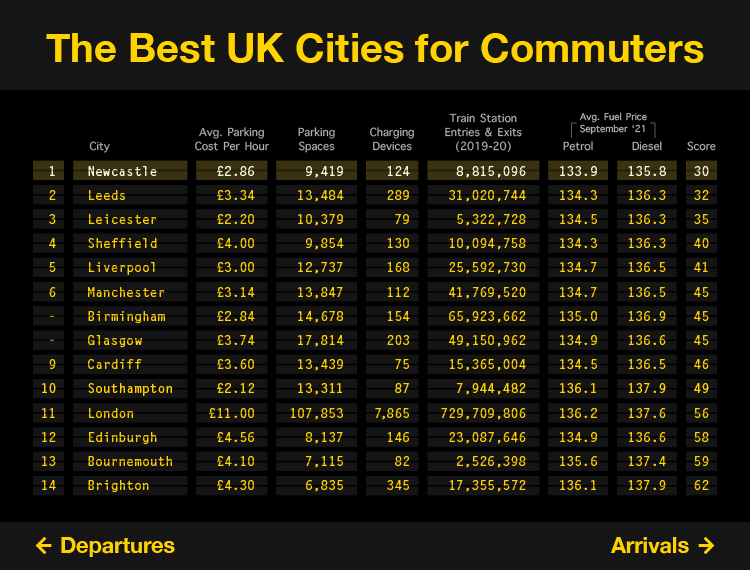 Just behind Newcastle in second place was Leeds. Also offering low fuel prices, the city has 289 public electric vehicle charging devices, the third highest of all the cities we analysed.

Scooping third place is Leicester. Working in the city’s favour is the low parking costs; averaging £2.20 per hour, that’s the second lowest of the cities analysed and only 8p behind first place Southampton.

While taking position 5 and 4 for average petrol and diesel prices respectively, Leicester had the second lowest number of public charging devices for electric car drivers.

Interestingly, London only managed to secure 11th in our rankings. Although the city has the highest number of parking spaces and electric vehicle charging devices, its rankings suffered as a result of its high parking and fuel costs, and busy train stations.

Averaging at £11 per hour to park, London also has the highest petrol price and 12th highest diesel price of the cities analysed.

Perhaps it would be better to use public transport to get around the city; although, with a whopping 729,709,806 entries and exits to London train stations in 2019/20, it might be worth taking the bus instead!

London is home to 7,865 public electric car charging devices, which is good news for commuters who drive an electric vehicle.

Despite placing 14th on our list overall, Brighton has the highest number of public electric vehicle charging devices (345) outside of London, illustrating that the city is gearing up for the electric car revolution.

Leeds scoops third place with 289 charging devices. It’s worth noting that while these figures seem low, devices may have more than one charging connector and may be able to charge more than one vehicle at a time.

The UK’s low emission zones could change the rankings

In October 2021, London expanded its Ultra Low Emissions Zone, making it 18 times larger, to reduce air pollution caused by cars. Other cities on our list have followed suit, including Glasgow and Birmingham.

Six additional zones are earmarked for 2022, four of which are planned in Manchester, Newcastle, Sheffield and Edinburgh. The additional charges brought about by these zones will make the daily commute more expensive for non-compliant cars. However, it will help make our time in the city centre safer and more enjoyable, while helping to reduce commuting carbon.

While we may work in cities, we appreciate that many people don’t want to live in the hustle and bustle of city life. That’s why we’ve extended our research to highlight the best places to live if you’re regularly commuting to the UK’s major cities.

Before we ranked them, we excluded locations where average property prices were higher than in the city.

Here are the best places to live for commuting to UK cities:

The table below shows the best UK towns for those who commute in for work. For each major city, you’ll find the top three commuter towns. 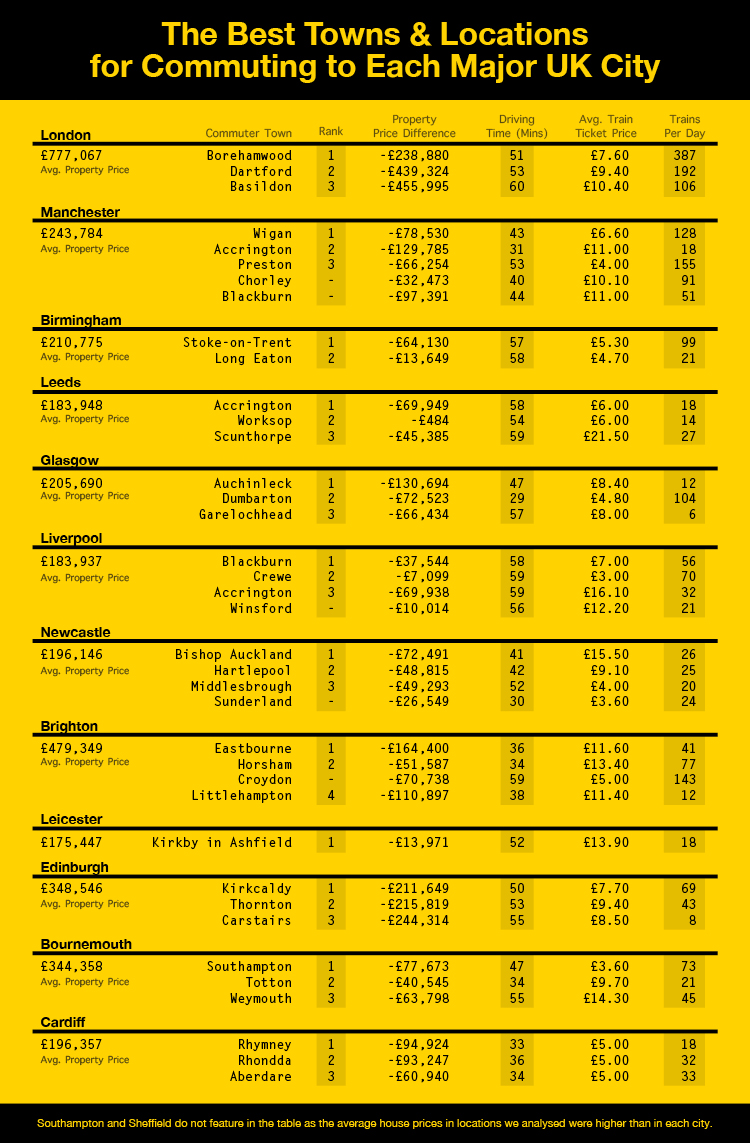 Basildon, Borehamwood and Dartford offer cheaper homes near to London

Perhaps unsurprisingly, some of the greatest property savings can be found outside of London. On average, buying a property in the capital will set you back £777,067! Extend your property search to an hour up the road in Basildon, and you could save a huge £455,995!

For a slightly shorter commute, Borehamwood is a 51 minute drive from the city and you can still save £238,880 on the average property price. With the cheapest advanced train ticket costing £7.60 and 387 trains into the city each day, the town is a great choice for regular London commuters.

Sunderland and Middlesbrough offer travel into Newcastle for £4 or less

There are plenty of options for living close to the UK’s best city for commuters too. The average property in Newcastle costs £196,146 but if workers were to head a 41 minute drive away to Bishop Auckland, they could shave £72,491 off their property price.

There are 26 trains a day from Bishop Auckland to the city, although at £15.50 for the cheapest advanced train ticket, train passengers may prefer Sunderland or Middlesbrough instead. The cheapest tickets from these stations are just £3.60 and £4 respectively.

Of all the towns in our rankings, the closest driving distance to a major UK city is 29 minutes, between Dumbarton and Glasgow. Despite being a short way away, property prices in Dumbarton are on average £72,523 less than in Glasgow. With 104 trains daily, the location is a great all-rounder commuter town.

If you’re gearing up for your return to work, discover the perfect city car for your next commute in our range of new cars and used vehicles.

How we crowned the UK’s best commuter city

We then ranked each factor from 1 to 14, where 1 was the best and 14 was the worst. We combined these rankings to create an overall ‘Commuter Score’. The lower the commuter score, the better the city is for commuters.

Cities were selected based on population size. Car parking prices relate to private car parking charges as per The High Street Parking Index. Figures for Brighton were sourced from the council website. Parkopedia and ParkMark were used to find the number of parking spaces.

Train station entries and exit data relates to 2019/20 and is from the Office of Rail and Road. Average fuel prices are regional and based on September 2021 data from The AA.

How we crowned the UK’s best commuter town

Using Within Hours, we identified locations that were within 60 minutes (the UK’s average commute time) of each major UK city we analysed. For each of these locations, we collected the driving distance to the city, the average property price, the price of a train ticket and the number of trains each day.

Before we ranked each factor, we excluded locations where average property prices were higher than in the city. We then ranked each factor from low to high, where 1 was the best. We combined these rankings to create an overall ‘Commuter Town Score’. The lower the commuter town score, the better the location is for people commuting into the city.

Average house price figures were collected from Right Move and represent the average selling price of properties over the past year. Train frequency and ticket price information was sourced from The Train Line. All information relates to single journeys from the city to the commuter town. Prices are for the cheapest advanced ticket.