The 500L Beats Edition, as the model is known, is available with two petrol engines, comprising the 120hp 1.4 T-Jet and the 105hp 0.9 TwinAir Turbo. Diesel variants are also available in the shape of the 105hp 1.6 MultiJet II powertrain and the new 120hp 1.6 MultiJet II.

Fiat's 1.6 MultiJet II turbo-diesel engine is EU6-compliant and is equipped with a variable geometry turbocharger, offering top speeds of 117mph, up from 112mph with the 105hp engine.

Combined consumption dips only slightly to 61.4mpg (versus 62.8mpg) while CO2 emissions of 120g/km (+3g/km) ensure it remains in the same tax and BIK band as the 105hp engine.

As well as the developments under the bonnet of the 500L model, the partnership with Beats Audio has meant the employments of the latest Beats by Dr Dre technology to provide a rich, immersive listening experience for all occupants.

The 520W output from the audio system comes from an eight-channel DSP-equipped amplifier, while the seven-speaker system provides advanced equalisation algorithms to recreate the sound spectrum artists experience during studio recordings.

Tales of the unexpected: Fiat 500 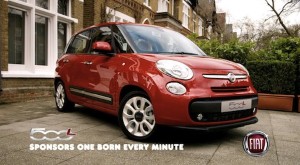 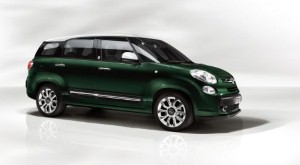