Renault had a rather successful time at the What Car? annual Car of the Year awards on Wednesday (January 8th), with the manufacturer picking up a hat-trick of awards for respective models.

The Megane Renaultsport 265 Cup continued its success of recent years by picking up the Best Hot Hatch over £20,000 for the fifth year running.

It's just another validation of the quality the Renaultsport has delivered over the years, proving there is simply no other model that can compare to it in its segment.

The model has recently received a facelift, bringing it in line with the latest Renault design signature.

Judges said the car is above and beyond any other car for straightforward, unadulterated excitement and driving pleasure.

“The astonishing grip, body composure, and that explosive engine really do make this a thrill-a-minute car. To top it all, the hot hatch is perfectly tolerable in everyday driving – motorway journeys are a reasonably refined, comfortable affair, and it’s easy enough to pilot around town.”

Elsewhere, the Renault ZOE Expression took home the title of Best Green Car at the awards. In addition to being economical to drive and kind to the environment, the car also delivers excellent performance, a great image and practicality.

Judges said: “The ZOE’s attributes don’t stop at affordability. It’s a great small car in its own right, with room for four adults and a useful amount of luggage, a suitably bright and futuristic-looking interior, and big-car standard equipment including satellite navigation and a colour touch-screen.

“It’s even fun to drive, with the characteristic zesty initial acceleration and outstanding refinement of electric propulsion, as well as a comfortable ride and handling balance.”

The car emits just 54g/km of CO2 and has picked up a number of accolades since its release. Following the announcement of its success from What Car? the ZOE has also achieved a plaudit from the Euro NCAP safety rating body, who called the model the Best Supermini of 2014.

Finally, Renault rounded-off the evening with a title for the Captur, which claimed the Best Small SUV under £16,000 title.

Specifically, it was the TCe 90 Dynamique MediaNav that took the title, thanks to its user-friendly cabin, quiet cabin for its kind and minimal CO2 emissions.

“Renault’s engineers clearly worked hard to make it a safe car, too, because the Captur was rated highly for adult, child and pedestrian protection when it was crash-tested by Euro NCAP," What Car? judges stated.

The awards mark an exciting year for Renault, who will be making the most of the awards when it launches further models throughout the year.

With a new design signature, it is hoped the brand will take an even bigger leap into the market than it has already achieved during 2014. 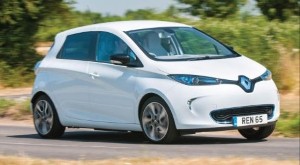