After unveiling its 2008DKR earlier this year, Peugeot has now revealed the livery which the all terrain car will sport in the 2016 Dakar Rally.
Bristol Street Motors

Wearing all of the colours of its partners in the Dakar project, the 2008DKR boasts a silver roof which is designed to reflect the harsh sunshine of the Argentine summer, where temperatures can exceed 50 degrees centigrade.

The flowing colour scheme emphasizes the 2008DKR's eye catching new shape, which has been evolved to make the vehicle wider, faster, lower and more powerful than the previous model which made it's Dakar debut 11 months ago

Peugeot Sport director Bruno Famin commented: "If the car goes as well as it looks, then we are certainly set for a strong year next year! In its definitive livery, the new Peugeot 2008 DKR16 looks like it's going really fast even when it's standing still. We know that our cars will definitely have a strong visual presence on the Dakar: now it's down to us as a team to make the most of that." 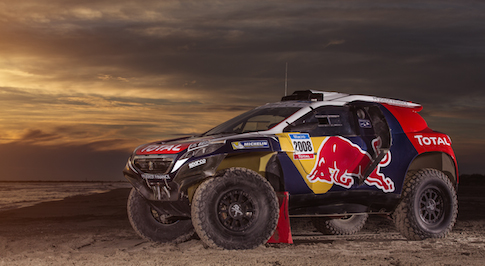