Vauxhall has said the new VXR is the "most powerful production Astra ever built".
Bristol Street Motors

Hot hatch fans will be watering at the mouth at the prospect of getting behind the wheel of the forthcoming Vauxhall Astra VXR.

That is after the manufacturer explained that the VXR will be the "most powerful production Astra ever built".

Vauxhall's own stats show that the new model will boast a "trailblazing" 2809PS and 400NM of output, which is said will help the VXR "trounce" its key rivals.

Those lucky enough to get behind the wheel will also benefit from a bespoke chassis with limited slip diff and Brembo brakes.

"Hot on the heels of the recently launched GTC ... the new Astra VXR, which goes on sale next year and is set to become one of the most powerful cars in its class and the fastest production Astra in Vauxhall's history," Vauxhall said.

"Based on the GTC's platform and powered by a 2.0-litre turbocharged direct injection engine, the Astra VXR produces 280hp of power and a mighty 400Nm of torque, enough for it to achieve a top speed of 155mph." 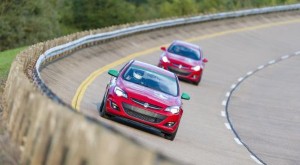