Renault is hoping its engines will propel the Red Bull team to another win at Silverstone this weekend.
Bristol Street Motors

Renault is looking forward to this weekend's racing at Silverstone, the place where its engines have propelled the Red Bull team to several victories in the past.

And the brand famous for the Clio and Espace could be looking at yet another win, as its technology provides the power behind some of the world's best Formula One drivers - Sebastian Vettel and Mark Webber.

In last year's qualifying for the British Grand Prix, Renault's engine pushed Vettel to pole position while Webber came in immediately behind.

The ensuing race saw a victory for Webber while Vettel came in seventh, but the 24-year-old German has since seen success after success in this year's season.

"Renault Sport F1 has reasons of its own to look forward to the race as it's been the scene of some of its finest-ever victories," the brand stated, highlighting that its first ever win was in 1983 with Alain Prost in the Renault RE40.

Vettel has so far come first in the Australian, Malaysian, Turkish, Spanish, Monaco and European grands prix this year. 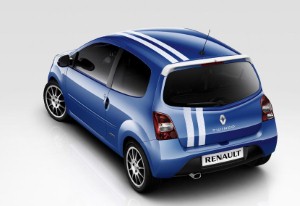