Vauxhall has launched its Kamara Challenge, which will see England footballers go head to head in a Corsa VXR and a Lamborghini Aventador, racing through an underground car park trying to park first.
Bristol Street Motors

There is a massive 495hp difference between the two cars, with the Corsa VXR producing 205hp, whilst the Aventador boasts 700hp.

Tottenham Hotspur and the England national player Harry Kane took to the wheel of the Corsa, whilst former player John Barnes steers the supercar. Another former player turned presenter, Chris Kamara provides a commentary on the race.

Whilst the supercar took the lead on the straights, the nimble new Corsa VXR makes short work of the speed bumps and displays Vauxhall's legendary precision and technique going into corners.

Chris Kamara stumbled through the commentary and calls half time to refuel with a pie. He commented on the filming, "It could be a scene from any busy shopping centre car park on a Saturday morning near Sainsbury's. I've witnessed people who'd sell their own granny for a parking spot. The smart money was always on Harry Kane, he's leaner, meaner and probably greener in the new Corsa VXR compared to Barnsey who has quite clearly had his day."

Vauxhall's new Corsa VXR hot-hatch raises the bar for in its segment, boasting 0-60mph acceleration of 6.5 seconds and a top speed of 143mph.

Check out the challenge here: 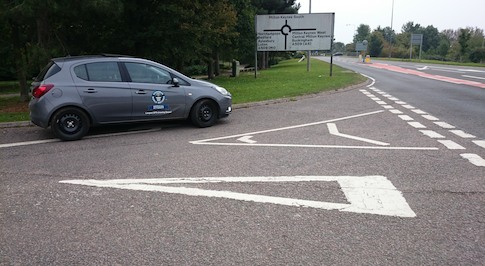