Vauxhall's new Corsa which went on sale this month has created a stunning Halloween computer generated image using Britain as it's backdrop.

The 6,080-mile-long image which spans the length and breadth of Britain's mainland - sets a new best for the Guinness World Records  beating the old sketch by nearly 2,000 miles.

Completed just in time for Halloween, the image featured jagged teeth, giant pumpkins and a 1,420-mile long spider's web stretching across the M25.

Simon Hucknall, Vauxhall's PR manager, said: "There are Corsa's in every village, town and city in Britain, so we thought it fitting that the new model should visit as many places as possible to celebrate its arrival. Halloween-day coincided with the end of our press launch, and our GPS artist drove like a bat out of hell to produce an apt image of epic proportions."

The artist at the wheel of the Corsa was US-born Jeremy Wood, one of the pioneers of GPS illustration, which combines drawing, travelling and technology to create artwork on a large scale. Over 264,000 positions were recorded with the Corsa's GPS receiver and linked together like a virtual dot-to-dot drawing with Britain as its canvas.

Jeremy drove what the typical driver does in a year in just over a month, averaging over 50mpg in the Corsa 1.0-litre ECOTEC. The Corsa accumulated 9,750 miles, averaged 221 miles each day, consumed 961 litres of petrol, achieved 45mpg and only had one incident, in which a pigeon collided with its door mirror.

After starting out from Vauxhall's HQ at Griffin House in Luton, Jeremy drew the first mile of the image in Caereinion, Wales. Nearly 10,000 miles and 44 days later, he completed the drawing in Wallingford, Surrey, England. 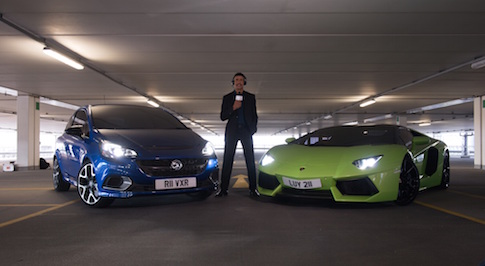