The Ford EcoSport is one of the smallest SUVs on the market but still provides an impressive amount of space.

Fitting snugly between the Fiesta supermini and the B-Max people carrier, the EcoSport measures just over four-metres long  which is taken to 4.7-metres with the rear-mounted spare wheel.

The advantage of having the spare wheel mounted on the rear door means that its boot-space is much larger in comparison to its rivals.

The EcoSport is available with three engine options including one diesel and two petrol. Its 1.5-litre diesel variant produces 90bhp and returns a respectable 61.4mpg, while emitting 120g/km of CO2. The two petrol versions include: a 1.5-litre and the award-winning 1.0-litre EcoBoost. The dinky three-cylinder 1.0-litre is more economical than the 1.5-litre petrol, returning around 53.3mpg with emissions of 125g/km.

Front fog lights, climate control and keyless entry are all fitted as standard on entry-level models, while features such as full leather trim, 17-inch alloy wheels and cruise control come as standard on the Titanium X specification. 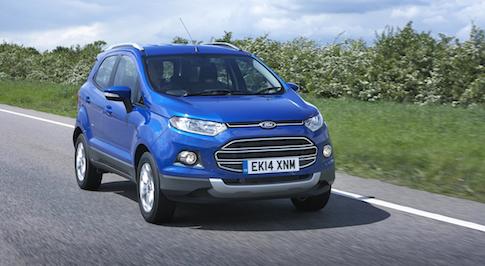