Ford's new compact SUV the EcoSport is a similar length to the company's popular Fiesta supermini, but is much taller and slightly wider, giving it a chunky off-roader look, which is reinforced with a hatchback-mounted spare tyre.

Buyers can choose from three different engines for the EcoSport  two petrol versions and a diesel. The cheapest model is the 1.5-litre petrol, which offers up 111bhp and is available with manual and automatic gearboxes. Also available are a turbocharged 1.0-litre 123bhp model and 1.5-litre 90bhp diesel.

The EcoSport features a practical, family-friendly interior with 20 cubby holes across the cabin, including space for up to six drinks cans in the cooled glovebox. There is also a handy drawer underneath the front passenger seat, along with front door pockets that can hold large drinks bottles.

The boot is usefully large too, with no spare tyre taking up boot space and a total of 333 litres of space. This increases to 1,238 litres with the rear seats folded. Thanks to a tight turning circle and the option of rear parking sensors, the car should be easy to manoeuvre. 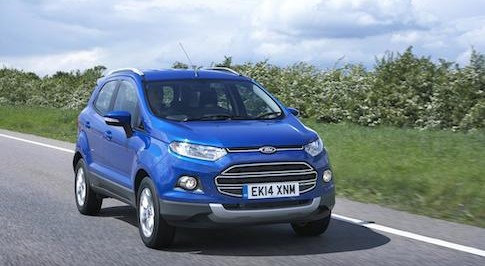