It tops the record achieved in the previous year of a five-strong haul of prizes and continues the consistent success the range has achieved. And that's not to mention the variety of other plaudits it has since taken.

Let's take a closer look at the successful vehicles to discover what makes them worthy of such plaudits.

The ever-reliable Ford Transit has been a mainstay of the commercial market for almost half a century.

With a new version released earlier this year, it is set to once again be one of the top models of its class.

It comes with 11 per cent more load volume than its predecessor, as well as featuring class-leading door width and rear step height.

Under the bonnet is a reliable 2.2-litre Duratorq TDCi diesel engine, with a choice of three power ratings based on a customer's specific needs: 100 PS, 125 PS and 155 PS. Also available is the highly efficient Transit ECOnetic engine, cutting CO2 emissions to 169g/km and offering 44.1 mpg.

Of course, it has been made extremely convenient for the commercial user, including a voice-activated Ford SYNC system, a rear view camera and adaptive cruise control.

Winner of the International Van of the Year title for 2013, the Transit Custom also offers class-leading load-carrying ability for its size.

It comes with a number of innovative solutions for storage, especially for extra-long items and a high-roof version of the model is available.

Like the Transit, it comes with a 2.2-litre Duratorq engine, but it also features a lane keeping alert system to warn drivers when they are drifting across the road.

Furthermore, it is the only vehicle in its segment to achieve a five-star Euro NCAP safety rating.

After the success of the Custom, the Connect was the next Ford commercial vehicle to scoop the coveted 'International Van of the Year' title for 2014.

It's partly thanks to the choice in bodystyles, with Van, Double-Cab-in-Van and Kombi available. The selection offers a maximum practical load volume of 3.6 m3 with a full bulkhead, while top payloads of 1,000 kg match the best in class figures. 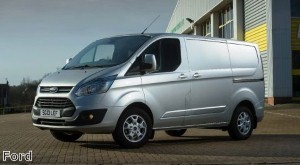 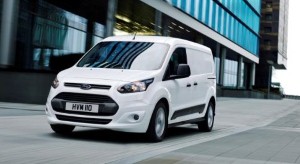