Rally ace Ken Block has posted another of his Gymkhana online, showing both his driving ability and the credentials of the 2012 Ford Fiesta HFVF.

Gymkhana FIVE: Ultimate Urban Playground: San Francisco sees the driver crank it up a notch with a series of dangerous and expertly carried out manoeuvres.

At one point, the Ford races up the famous San Francisco hills and grabs some huge air before crunching back down on the tarmac, only for Block to instantly regain control and powerslide round another corner.

Block is well known for his powersliding ability and fondness for doughnut spins and the new video has both in abundance.

The famous San Francisco tram drivers were given a fright when Block roared into view in order to perform a stunning double doughnut between two moving trams.

Stunt rider Travis Pastrana also features in the video and performs a wheelie, while Block spins his car under the front wheel of the X Games winner's bike.

While Block relied on his souped-up Ford Fiesta for the actual drive, the scouting mission for this video was entrusted to the all-new Ford Focus ST, which boasts some 246 horses.

Block admitted that he was satisfied with the finished result, but claimed he is anxious to top his efforts each time he takes to the road.

"The goal is to always to make the next one better, which is tough, because every time I finish one of these I think it’s the best one yet," he said.

Footage of the drive and behind the scenes clips featuring the Ford Focus ST have also been posted online.

Priced at £21,995, the Focus ST has been pitched as the Blue Oval's first global performance car and has been developed jointly by Ford's Team RS in Europe and the Special Vehicles Team SVT unit in the US.

ST fans from 40 countries around the world will be able to get behind the wheel of the new car, with the first UK deliveries due in September this year. 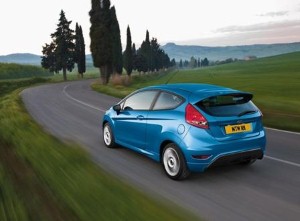