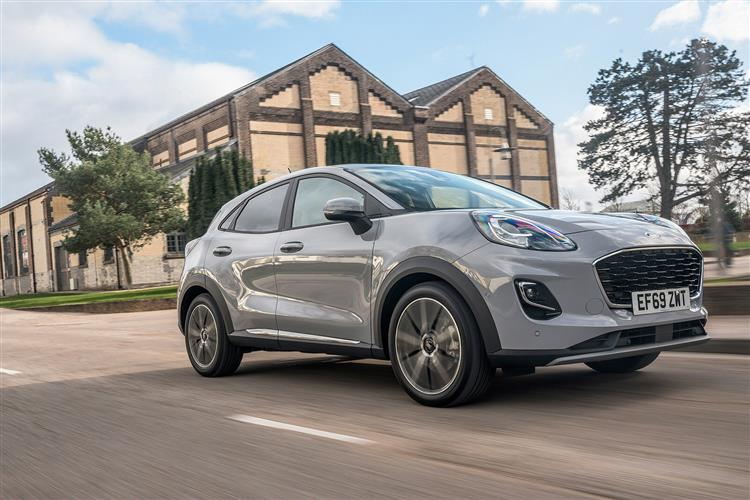 Ford finally gets really serious about the small SUV segment - in the shape of this charming little Puma model. It champions mild hybrid tech and doesn't have much time for SUV conventionality. All of which will suit its fashionable band of potential buyers just fine. Frugal, fun and well connected, it fits with the spirit of its time. Just as the original Puma model did.

You might just remember the Ford Puma - but you won't remember it like this. The much-loved original Puma was a little coupe made just after the turn of the century, but cars like that just don't sell any more, so this model line has rejuvenated itself as what Ford calls an 'SUV-inspired Crossover'. Like the original Puma, it's based on Fiesta engineering and is primarily powered by the mild hybrid 1.0-litre EcoBoost petrol engine the Blue Oval brand has also ear-marked for that supermini. Dynamic changes over the Fiesta include a new setting for the electronic power steering, a stiffer attachment for the beam axle and five-stud hubs for a more rigid fixing of the wheels. All of which should mean that this car handles a little more sharply than direct class competitors like Nissan's Juke and Renault's Captur.

From a handling perspective, we can very much expect the Puma to be a Crossover first and an SUV second. Or to put it another way, it'll handle far more like a good supermini than a typical Juke or Captur-class contender. The big engineering interest here lies in the 48V mild hybrid powertrain, which in this case is based on Ford's familiar 1.0-litre EcoBoost petrol engine. Here, a conventional alternator is replaced with an 11.5kW integrated starter/generator (called a 'BISG'). The resulting powerplant is available in either 125 or 155PS guises, both versions available with a 7-speed dual-clutch auto gearbox. Like most mild hybrids, Ford's 'BISG' set-up works in a couple of ways. Either it can be used when coasting or braking to recover energy (which then gets stored in a small lithium-ion battery); or it can assist the engine during acceleration. The brand says that extra electrified assistance has enabled it to lower the engine's compression ratio and fit a larger turbocharger - which all sounds pretty promising for those in search of perky performance. The alternative non-hybrid engine is the 1.5-litre EcoBoost 200PS unit that features in the top Puma ST Permance model. This delivers 0-62mph acceleration in 6.7 seconds. Top speed is 137mph. An optimised chassis features bespoke twist-beam, anti-roll bar and damper configurations. And steering response is 25% faster and the brakes are 17% larger than the standard Puma.

The original Puma was smaller than the Fiesta it was based on. This one's quite a lot bigger, its five-door SUV body being 46mm longer, 54mm higher and 71mm wider, plus the car has a 95mm longer wheelbase than the Fiesta. The headlights are high up on the bonnet (like the first Puma) and Ford says that the beady daytime running lights you get on 'St-Line' variants are a nod to a more modern Ford coupe, the GT supercar. Maybe. Inside, it's less distinctive. The interior is much like you'd find in any modern Ford, related most closely of course to the Fiesta, with its simple design, SYNC3 infotainment system and relatively smart materials. You do get a few bespoke features, like a digital display for the dials and zip-up covers for the front and rear seats. These not only allow owners to mix and match patterns and colours, but also wash them should they need to: neat. We were impressed by the boot. At 456-litres, it's one of the very biggest trunks in the small SUV segment and is accessed by a powered hands-free tailgate. There's also an adjustable-height floor that can be folded back against the back seats.

Puma pricing reflects current figures at the upper end of the small SUV segment - which Ford feels justified in asking given this car's relatively sophisticated mild hybrid tech. To be specific, that means a starting point of around £23,000, with figures rising to around £32,500 at the top of the range. Trim levels are based around familiar 'Titanium' and 'ST-Line' badging, plus at the top of the range are 'ST-Line X' and 'ST-Line Vignale' variants before you get to the top 1.5-litre ST Performance model. Standard equipment on most models includes heated and massaging seats, a heated steering wheel, adaptive cruise control and a rear-view camera. The Puma is also the first vehicle in its segment to offer hands-free tailgate and Lumbar Massage Seat comfort and convenience technologies. Advanced driver assistance technologies include Adaptive Cruise Control with Stop & Go, Speed Sign Recognition and Lane Centring, for easier negotiation of highway and stop-start traffic. There's also a 'New Local Hazard Information' feature, which can inform the driver of hazardous situations in the road ahead before they become visible to the driver or vehicle sensors. And helping Puma drivers reverse with greater confidence, Ford's Blind Spot Information System (BLIS) with Cross Traffic Alert can provide a warning when reversing of vehicles that may soon be crossing behind them. The system can apply the brakes to avoid or mitigate the effects of collisions if drivers do not respond to warnings.

Being based on Fiesta engineering promises decent efficiency, as does Ford's latest EcoBoost Hybrid technology and that's how it turns out. The extra electrification apparently improves combined cycle WLTP-rated economy by around 9% over what you'd get from an ordinary 1.0-litre EcoBoost engine. For the 125PS variant, Ford is talking about CO2 emission readings from up to 127g/km and a combined cycle WLTP fuel return of up to 50.4mpg. For the top 155PS derivative, the figures are the same. For the 1.5-litre ST variant, the figures are up to 40.9mpg and up to 155g/km. With the 1.0-litre mild hybrid models, the claimed efficiency readings are all aided by what the brand calls 'Torque substitution', which deploys the electric motor functionality of the hybrid system's 'BISG' 'Belt-driven Integrated Starter/Generator' to provide up to 50Nm of torque - reducing the amount of work required from the petrol engine. The 'BISG' is also able to aid the powerplant's stop/start system in urban traffic, restarting the engine in approximately 300 milliseconds - about the same as the blink of an eye. And the 'BISG' also enables the Puma EcoBoost Hybrid's Auto Start-Stop technology to operate in a wider range of scenarios for even greater fuel savings, including when coasting to a stop below 10mph, and even when the vehicle is in gear with the clutch pedal depressed.