Citroen's charismatic DS3 has been named Best Small Car in the annual What Car? Survey, for the second year running.
Bristol Street Motors

Citroen's DS3 has picked up the gong for Best Small Car at the annual What Car? JD Power Survey.

Picking up the award for the second year running, the charismatic car, which received a customer satisfaction score of 79.3 per cent, was commended for its affordability and driver visibility.

It was also lauded for its commitment to aesthetics, with judges stating that the number of personalisation options and colour combinations on offer is sizeable.

Jim Holder, editor of What Car?, said that the DS3 had established itself as a truly "desirable" small, adding that its "bold, fun and customisable" styling sets were distinct in comparison to competitors.

Linda Jackson, managing director of Citroen for UK & Ireland, added: "To top its class for two successive years is a fantastic result for DS3 and it is all the more special to win an award that is voted for by owners themselves.

"Receiving such high praise for a variety of aspects, from styling to running costs, is testament to DS3’s versatility and desirability as it continues to impress across the board." 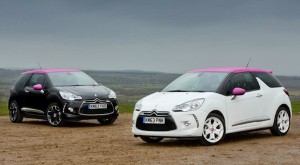 Citroen in the pink with new DS3 models